Elmo wonders what amazing and exciting act he can perform for Sesame circus, but he's struggling to figure it out. Then he has an idea! What if he rides his tricycle down a ramp and through a hoop? Let's try!

This episode features an all-new street story, I Wonder, What If, Let’s Try ("Tight Rope Walkers"), a new Abby's Amazing Adventures ("Clowns") and Elmo the Musical ("Circus the Musical"). 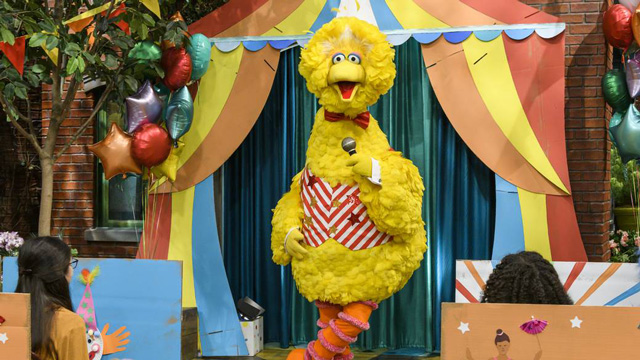 So, It’s Sesame Circus. I’ll be honest, I never thought I’d see SST tackle this topic in the modern era, with all the circus closures and creepy clowns and whatnot. But aside from that, I have literally nothing to say except is this the greatest show on Earth, or is it not? Let’s see.

The cold open features Elmo and the Two-Headed Monster setting up the theme of the circus. Both heads want to be a clown, and they begin fighting over a colorful wig. Elmo suggests they both be clowns, and the argument ends. Not much else to say, but it’s nice to see the Two-Headed Monster have a major role in something, even if it’s just 30 seconds long.

The episode proper begins with Big Bird setting up a circus in front of the community center, and of course, he sings a song about it. Everyone on Sesame Street is excited, including Herry Monster (nice surprise).

Anyway, the circus begins with Grover balancing a spinning plate on his nose, and somehow he never drops it. Meanwhile, Elmo wants to do an act for the circus, but doesn’t know what to do. Chris decides to help him think of something, and he decides to use a nearby bike ramp. Chris then brings up that when he one time went to the circus, he saw a daredevil ride her motorcycle up and down a ramp, inspiring Elmo to do the same with his tricycle.

After rehearsing the act, he feels confident. But when Big Bird announces the next act (Charlie spinning a hoop), Elmo believes his act isn’t good enough and wants to improve it. Charlie’s act soon ends, and Elmo is next. He explains his problem to Big Bird, and how he loved the hoop in Charlie’s act. This inspires her to donate the hoop to Elmo’s act, where he rides up the ramp, down the ramp, and through the hoop. The crowd goes wild, and the street story ends.

All in all, this was another basic street story. Elmo wants to be part of the circus, and through trial and error, he is. It did have some fun parts though, such as when Big Bird said “Hold onto your hats”, Herry actually felt around for a hat. If I had to describe my thoughts on this episode in a few words, I’d say it’s something of a mixed bag.

Speaking of Abby's Amazing Adventures, that segment starts with Rudy throwing balls of socks into a laundry basket. Their friend Basket arrives, and takes them to the circus, where they get to be clowns (by the way, if you have coulrophobia, I can guarantee this episode is not for you). The two make up names and clown around (pun very much intended), until Basket shows them a dunk tank. Rudy has to dunk Abby in the tank, but he throws the first ball to short, and the second ball so far it winds up in the jugglers act (which I liked). He considers giving up, until Abby reminds him of when he threw the sock balls into the basket at home. He regains his confidence, and success dunks Abby with the last ball. Basket takes the duo home, and the segment ends.

Next is the number of the day, which is 9. And once again, we get nothing. I’m starting to think SST doesn’t do Number segments anymore.

After that, we go to Elmo the Musical, which means I finally get to talk about something different! The segment begins with Elmo imagining a circus setting, where he plays “a monster with a dream”. However, he does not have an act, but vows to find one. The ringmaster then cues the Great In-Betweeni, only for him to literally be trapped between a rock and a hard place. Elmo decides to take his place, where he must jump of a trampoline and land in between two cacti. He instead lands on top of a cactus (by the way, I love the delayed reaction where he didn’t feel anything until the ringmaster told him he was on top of a cactus). A chicken then arrives, and does the act flawlessly. The ringmaster then cues an upside-down clown, only for him to be accepted into law school. Elmo again decides to take his place, but can’t stand upside down long enough. The chicken from earlier sings a song to encourage him to “keep on cluckin”, and Elmo successfully does the act. Velvet gives the play “two tassels up” and the segment ends.

Finally, Big Bird And Elmo recap the street story, and that ends the episode.

Overall, it was a mixed bag. There was good stuff, boring stuff, infuriating pointless stuff, and fun stuff. The good stuff was entertaining for what it’s worth, but if I ever rewatch this episode again, I’ll probably skip the pointless stuff. As for a rating, I feel a 6/10 would work best for what we’ve got with this. See you next week for the next review, but in the meantime…

Well, that was a very entertaining episode. But, one thing's for certain: I couldn't take pictures of the title card due to the black background. I think this was likely done to prevent copyright?
A

I thought Charlie looked cute in her circus outfit. The monster with four arms juggling in Abby's Amazing Adventures was funny.

"It's Sesame Circus" premieres on PBS this Wednesday September 22. Tune in and let us know your thoughts.