When Elmo and Baby Bear are disappointed that they can’t celebrate the holidays as they planned, Alan wonders if he and Nina can make Hooper’s more festive. What if they make decorations and celebrate in a new way? Let’s try! 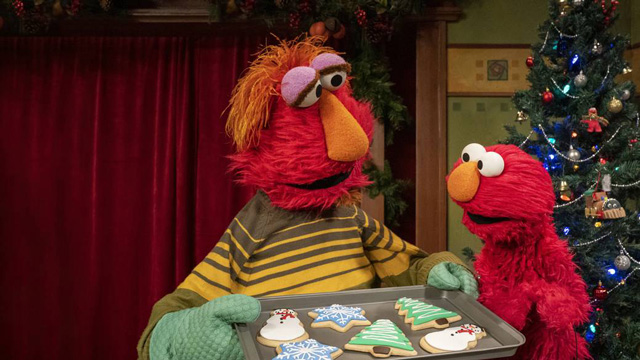 So, Holiday at Hoopers. I was pretty excited for this episode when I first heard about it. Not because of the street story, but because I was interested to see how they’d fill the episode with segments. I’m a very festive guy myself, and I love the winter holidays (though here in Westerville, I only ever see people celebrating Christmas). But with all that said, will this episode be like an early Christmas present, or is it the equivalent of getting coal in a stocking. Let’s find out, shall we.

The cold open features Prairie Dawn telling Grover about all kinds of holidays. Grover then brings up his favorite one, “Wear a Bunny Slipper on Your Head Day”. Prairie is not amused. This was a good cold open. I love Stephanie’s Prairie, and this is more of that goodness (I loved her saying “Sigh”). Grover was amusing here too.

The episode begins with… the Holiday Lights song from the HBO Christmas special. I’m planning on reviewing that someday, so I won’t go in depth here. For now, let’s just say it’s a good opening song, for both the special and this episode.

The episode proper begins with Elmo and Baby Bear going into Hoopers, excited to celebrate Christmas and Hanukkah, respectively (we also see Oscar buy ornaments to break for Crankymas, the Grouch version of Christmas).

But there’s a change of plans when Alan receives a call from their parents, who are stuck in traffic due to a snowstorm. The two are disappointed, when hope comes, in the form of Nina. She and Alan think they can celebrate the holidays at the store until the kids’ parents return. They get out some paper (which Elmo thinks is to make sale signs; I found that amusing) to make decorations with, and Alan finds the ingredients to make latkes. Elmo even gets the idea to use a green ladder as a makeshift Christmas tree. They decorate the store while singing Deck the Halls, And once they’re finished, Elmo and Baby Bear’s parents arrive (including Papa Bear, now played by Marty, I think). They look in amazement at their kids decorations, and the episode ends. But not before cutting to Oscar celebrating Crankymas.
Overall, this was a fun Street story. It had cute scenes, some good lines, and it was nice to see Baby Bear and his family again. However, I’m wondering why if the episode took place on Christmas Eve, why didn’t they save it for next Thursday, which is Christmas Eve. Also, why is Baby Bear worried about missing Hanukkah, when this year, Hanukkah would be over by Christmas Eve. Oh well.

After another pointless “I Wonder, What If, Let’s Try” segment where two kids do exactly what we just saw in the street story, we get the letter of the day, which is H. For this, we get a bit with kids talking about their favorite holidays they celebrate. I’d complain about this being a “letter” segment, but because I thought it was actually interesting to see what holidays these kids celebrate, such as Eid, Rosh Hashanah, and Diwali, I’ll let this one slide.

After that, we get a bit where Abby and Elmo sing Jingle Bells, with backup by a Muppet bell, a Muppet Snowball, a Honker, a Dinger, and a penguin. It was pretty enjoyable for what it was. I liked all the different “weird” sounds in the song. Not much else I can say, though, so let’s move on.

Following that, we get a short scene where Gabrielle and Elmo exchange drawings. It’s a cute scene, and at the end, Elmo hears the 12 Days of Christmas. This leads to…

The Number of the Day! OK, not technically yet, but the NOTD is 12, and it happens right after the song, and I’m desperate for a number segment, so I’m taking what I can get.
Anyway, we get a version of the 12 Days of Christmas, sung by Cookie Monster, as he counts 12 types of Christmas cookies his friends gave him. His mother gives him a chocolate chip cookie, Abby gives him 2 letters, Baby Bear gives him 3 gingerbread men, and so on until Santa Claus himself gives Cookie (and his mother) 12 snowman cookies. I think this was really good. I loved the appearances from Mr. Johnson, a Martian, and of course Forgetful Jones (gotta love how he forgot his 10 bonbons). Plus, the food theme reminded me of the 12 Courses of Dinner, which is always a plus.

Since I already mentioned the Number of the Day, I guess it’s time for Elmo’s World: Monster Edition. It starts with Elmo imagining his “friends” (generic monsters who are never even named) caroling. Cookie Monster then arrives, who believes winter holidays include holidays about cookies. Elmo explains they don’t, and cues a video about the winter holidays. The two are fascinated, and decide to play a game where they prepare a young monster for New Years’ Eve. Cookie gives him a noisemaker and a snorkel, but the latter is soon exchanged for a party hat. Once the game ends, Cookie and Elmo ask Mr. Noodle’s dog, Schmoodle, how he celebrates Christmas. He dresses as a leprechaun and a ghost, before eventually dressing as Santa Paws (pun courtesy of Cookie Monster). The monsters dance, and the segment ends.

Finally, we see Elmo and Baby Bear’s families sign off, and the episode is over.

Overall, I really liked this one. There were a lot of cute scenes, fun songs, and amusing lines. I was debating what rating to give this, but now I feel comfortable giving this episode an 8/10. Best of the season so far. Can’t wait to find out what next week’s episode is about. Until then, see you.
Last edited: Dec 17, 2020

Weird seeing "Holiday Lights" reused like that, especially since they dubbed over Caroll's vocal (why?) and replaced the shot of Baby Bear's family.

Nice seeing Baby Bear and his family though. It was cute, maybe a little too focused on Elmo and not both him and Baby Bear.

This time, I uploaded the intro title card for this episode, but I covered part of the "Skip Intro" button. I wonder how this will play out.

This was a pretty good episode, to be honest.
A

I liked the nods to Once Upon a Sesame Christmas with Oscar saying Crankymas goes back to a time when everyone on Sesame Street was grouchy. I liked seeing Papa Bear played by Marty, too bad Curly wasn't there. I didn't like that they heavily edited Jingle Bells with Elmo and Abby. The bit with Elmo and Gabrielle was cute. I thought Cookie thinking that cookie-related holidays were winter holidays in EW was amusing. Also to answer Shane's question about why they dubbed over Caroll's voice in Holiday Time, it's likely because it was during the time when Caroll's voice started getting week, let's be honest.

antsamthompson9 said:
I didn't like that they heavily edited Jingle Bells with Elmo and Abby.
Click to expand...

Wow. I’ve never heard you say you didn’t like something in one of your reviews. You usually stay on the positive side.
A

CoolGuy1013 said:
Wow. I’ve never heard you say you didn’t like something in one of your reviews. You usually stay on the positive side.
Click to expand...

I try. But the full version with them singing the whole song, not just "Dashing through the snow" and "Jingle all the way" was a great way to show people that there's more to the song than just those two verses.

antsamthompson9 said:
I try. But the full version with them singing the whole song, not just "Dashing through the snow" and "Jingle all the way" was a great way to show people that there's more to the song than just those two verses.
Click to expand...

Wait, there’s more to the song than just those 2 verses over and over again?
A

CoolGuy1013 said:
Wait, there’s more to the song than just those 2 verses over and over again?
Click to expand...

I was surprised too.

antsamthompson9 said:
Also to answer Shane's question about why they dubbed over Caroll's voice in Holiday Time, it's likely because it was during the time when Caroll's voice started getting week, let's be honest.
Click to expand...