The Queen doesn’t have enough bricks to build a play castle for her daughter. This is a problem! Elmo, Cookie Monster, and Rosita wonder if they can use something else instead of bricks. What if they use cardboard boxes and tubes? Let’s try! It works. They didn’t give up, and they built a cardboard castle for the Queen’s daughter. (Guest: Issa Rae) 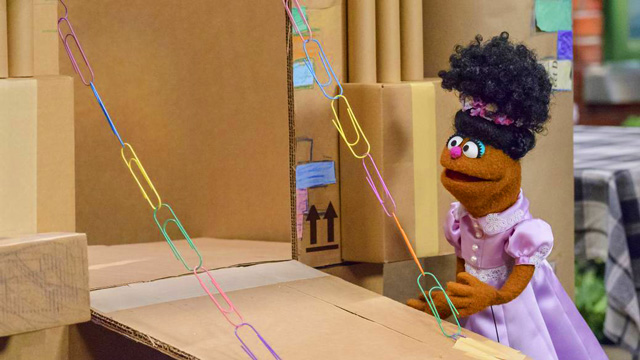 So, Cardboard Castle. I had no idea (well, actually a few ideas) what this episode would be about. Not the plot, the theme. When I found out it was about paper and paper products, I was interested. With a theme like that, they could either find a ton of different uses for it, or it’d sting like a paper cut. Which will it be? Let’s find out.

The cold open features Elmo talking about all the uses of paper, when Ernie pops out of a cardboard box. Nothing much else to say, but I did like the ending. Basically, Elmo was waiting for Ernie to pop out again, but Ernie somehow snuck out of the box, and surprises Elmo, leaving the latter confused. That was amusing.

The episode proper begins with Elmo helping Chris take out some cardboard products for recycling. Rosita and Cookie Monster come along, and the monsters start playing with the recyclables. Rosita, using a cardboard tube as a telescope, sees a queen (played by Issa Rae). She is sad because she wants to build a play castle for her daughter, but only has 2 bricks (By the way, who makes a play castle out of real bricks? That sounds ridiculous.) The queen draws a blueprint for the castle, and the Monsters are inspired to use the cardboard instead. For this, the Queen promises them 10 million thank-yous (and a cookie for, well, Cookie Monster) as payment. The monsters get to work while the queen enjoys a disgusting meal that even Chef Pee Pee wouldn’t make. After a montage, the castle is done, or is it…

Turns out the queen forgot to draw a dragon door on the blueprint. Rosita thinks it’s to keep the dragons out, but it’s actually the opposite because this is Sesame Street (By the way, this just occurred to me. What would a queen even be doing in the United States anyway?) Elmo adds one to the blueprint, and the others cut a drawbridge around the door. Now it’s done, or is it…

It turns out one of the towers is supposed to be taller than the other. Since they’re out of cardboard, they get the idea to make one tower shorter so the other one is taller by comparison. This works, and the daughter finally sees the castle. She loves it, invites the monsters to play in it with her, and Cookie Monster gets his cookie.
Overall, this was a bit of a mess. It left me asking more questions about how the plot works than teaching me anything about paper. Oh well, maybe the episode will improve after it.

Anyway, following a pointless bit of kids playing with cardboard, we get to the letter of the day. Today, it’s P, and we get some cartoon about making stuff out of paper, of course with the letter tacked on to the beginning and end. Nothing much to see here, moving on.

After another pointless bit, this one featuring Abby and Elmo making a paper city, we get to Abby’s Amazing Adventures. This installment starts with Abby and Rudy making arts and crafts, when Basket arrives. Today, she wants them to be kite makers, and flies them off to a kite festival. Rudy makes a simple kite out of newspaper, while Abby makes a kite out of orange tissue paper with an overly decorated tail. This hinders her kite from flying due to the weight. Rudy reassures his stepsister, and she un-decorates the tail with magic. Her kite is now able to fly, and the segment ends. Not much else to say, but I liked this one. It was neat seeing them make their kites, and watching them fly was satisfying (especially since I’ve never successfully flown a kite before).

Following that, we go to the number of the Day. And for the fifth episode in a row, we don’t get a number segment. Why? You could easily solve this problem if you didn’t have a filler segment in every episode. Oh well, at least they spend a lot of time counting the Martians, since today’s Number is 17 (the highest this iteration of the segment has gotten to thus far).

Finally, we have Elmo’s World. And yes, I meant it this time because this is a repeat from before this season. Elmo begins by thinking about newspapers, and wanting to learn about them. Since this was before he had a co-host, he calls for an anthropomorphic, animated smartphone named Smartie. Smartie shows Elmo a montage of newspapers, while describing what they are. I found it interesting that when she mentioned the comics, we see real licensed comics. I spotted Mutts, Pearls Before Swine, and Dilbert. Never thought I’d see a Trump supporter’s work on Sesame Street.

But back on track, once the montage ends, Elmo plays a game with the audience where they match pictures to their respective sections on the paper. After that, Elmo asks Mr. Noodle’s brother, Mr. Noodle how he reads the newspaper. He makes paper dolls and a hat out of newspaper before eventually reading it. Elmo does his happy dance, and the segment ends.

Finally, Elmo appears once again, decorating a cardboard box. Oscar pops out of the box and- Good Lord! Oscar looks horrible here. Who thought the extended fur all over was a good idea? I hope they got fired for that blunder.

So that was Cardboard Castle. The street story was a slight mess, the LOTD was lame, the AAA was good, and the EW was decent. I know I’ve given this to the past few episode (and admittedly regret it on 5103), but this feels like a real 6/10 episode. Not very good, but at least it had enough decency to avoid being mediocre or worse. Thank you all for reading, and I’ll see you in the next review.

There were a couple of amusing moments (Chris makes for a better low-key straightman than the whole "WHAT THE HEY!" thing he usually does), but there was an awkwardness to the whole thing that probably came from the editing. Issa Rae was so wooden too.

Not sure what the deal was with Elmo and "Poley." Seems like something Ryan thought would be funny on set, but I don't think it came off that funny.

I uploaded the title card for the episode to the wiki, but unfortunately, that has the stupid "SKIP INTRO" button in purple on the bottom right. If anybody's willing to get rid of that button, I appreciate your help.
A

I just love this new snarky side that Elmo has thanks to Ryan. A lot of Elmo's lines in the street story made me smile. The bit with Elmo not liking Abby's name for her polar bear I thought was funny. It was nice to see Rudy help Abby get confidence in Amazing Adventures instead of the other way around for once.

"Cardboard Castle" premieres on PBS this Monday September 20. Tune in and let us know your thoughts.

Season 51 episodes are also available to stream online at pbskids.org/sesame for a limited time.

Oscarfan said:
There were a couple of amusing moments (Chris makes for a better low-key straightman than the whole "WHAT THE HEY!" thing he usually does), but there was an awkwardness to the whole thing that probably came from the editing. Issa Rae was so wooden too.

Not sure what the deal was with Elmo and "Poley." Seems like something Ryan thought would be funny on set, but I don't think it came off that funny.
Click to expand...