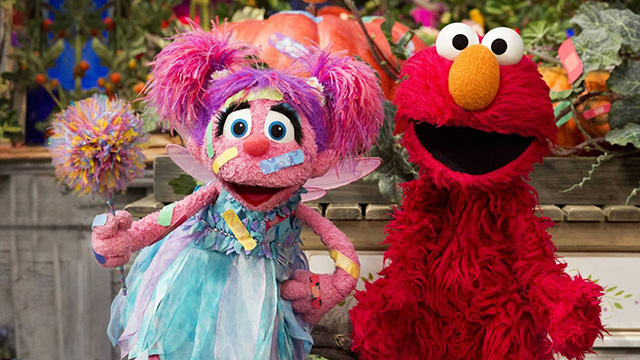 I guess Elmo's the host of the show now. Swell.

So, Bye Bye Boo Boos (what a childish title). I saw that they were going to repeat the “Boo Boo Busters” episode in the season trailer (marketing it as new stuff for some reason), as well as a clip of a new Elmo’s World: Doctors. I knew these 2 would be in the same episode, but I didn’t expect it this early in the season. Oh well, this’ll make my review of the original (and a few more episodes) much easier. With that said, will I be surprised in another way by it’s quality, or will I leave feeling hurt? Let’s find out, shall we?

So the episode starts with Elmo setting up the episode’s theme of doctors, when a doctor arrives to check his throat. Elmo says “Keep watching for more doctors today on Sesame Street” with his mouth open, and the doctor claims “You’re the most ridiculous sounding monster I’ve ever seen!” That line did get me to smile, but unfortunately not for long. I’ll get more into it later, but this episode really frustrated me.

The street story starts with Abby decorating her garden with bandages, thinking they’re stickers. Elmo and Chris tell her what their purpose is, with Chris telling her about one on his arm and- Good lord! Did they really have to show his scrape? Why Sesame?

Anyway, this comes to the dismay of a nearby Oscar (Remember when they announced he’d be able to teleport around Sesame Street from trash can to trash can? This is really the only episode to take advantage of that.), who hates how helpful and colorful the bandages are. But this doesn’t stop Abby and Elmo from getting inspired to become “Boo Boo Busters”, and help people on Sesame Street get better from boo boos. They even have their own (admittedly pretty good) theme song, which is interrupted by someone moaning over a boo boo. The Boo Boo Busters, of course, go to help him.
When they arrive, they see Big Bird has scraped his beak, and now it’s bleeding (which looks really gross). Elmo checks his heartbeat (for some reason), Abby wipes his boo boo with antiseptic, and the two put a bandage on (with Oscar witnessing from a trash can outside Hoopers). Finally, the Busters kiss the boo boo, and they hear more moaning. This is coming from the 2-Headed Monster, and both heads have scraped their noses. The Busters proceed to do the same thing they did with BB, and Oscar witnesses this too, this time from his own trash can. However, as he goes into his can to escape the happiness, he slams the lid on his finger (thankfully with no gore). Elmo and Abby decide to help him with the same methods they used on the others. Oscar is of course reluctant, but eventually obliges. I thought it was nice of them to give Oscar a stinky fish bandage for his finger, especially since he complained about the happiness of the ones they normally used. After that, the street story pretty much ends.
Overall, this was a very formulaic street story. If you saw Abby and Elmo help one person, you’ve seen them help all of them. However, there were a few cute scenes, and the Boo Boo Busters Song was good too.

This is followed by a short scene of Elmo riding his tricycle (When was the last time we saw him do that?), before running off to introduce the LOTD. I only wanted to point this out because I don’t see what this has to do with doctors or the whole “I Wonder, What If, Let’s Try” thing. Oh well, at least it’s only a few seconds long.

Anyway, the letter of the day is D, and we get another pointless film pretending to be a letter segment. Oh well, on the plus side, it’s re-used, so I can glance over it when I review the original episode it’s from.

That is followed by a short bit with Elmo at Big Bird’s nest, when they hear the horn of Cookie Monster’s Foodie Truck. And with that, I finally get to review a Foodie Truck segment! I’m glad about this because I actually really like these bits.

The segment starts with Cookie Monster and Gonger getting a call from a boy requesting they make pumpkin soup for his brother in the hospital. Cookie gets the ingredients, but has eaten the pumpkin, using the top as a “snazzy hat” (I love Gonger’s reaction where he falls for it at first, only to realize Cookie ate the pumpkin). They drive to a pumpkin farm, learn about how pumpkins grow, and get a pumpkin to take back to Sesame Street (By the way, the pumpkin they get and the one they use in the soup aren’t actually the same one. The pumpkin they get is more elliptical while the one they cook is round.) I think the part where they cook the food is probably my favorite of the segment, since it’s interesting to see how to make meals like that. I also enjoyed the gag where Cookie hurts his hand chopping the pumpkin while Ginger splits it in half just fine. Once the soup is done, they send it off to the hospital, and the boy’s brother loves it. The monsters sing their theme song and the segment ends.

Now onto the Number of the Day, and for the third time this season, we get a new number of the Day song for a number that didn’t receive one last season (first were 16 and 3). Today’s number is 14, and- oh no.
Yes, for the second time this season the show is like “Haha you thought we were actually going to air a number segment. No JK we lied. We tricked you hahaha.” It wouldn’t be so bad (it’d still be bad, however), but they make it worse but instead airing that Hailee Steinfeld song that literally premiered the episode before this one! Quick question, Who thought that was a good idea? I mean, I get frustrated when the show airs the same sketch multiple times a season, but literally in back to back episodes? I don’t just hope someone got fired for that blunder, I hope everyone got fired for that blunder! And of course, my thoughts on the song have gotten worse.

OK, better finish this review before I snap. Good thing the episode’s nearly done. All that’s left is Elmo’s World: Monster Edition (I had to bold it for emphasis). The segment starts with Elmo imagining the 2-Headed Monster as a Doctor, deciding he wants to learn all about doctors. Grover arrives, and brings in a Duck (claiming he’s a “quack”). It turns out Grover doesn’t know what a doctor is (even though he knows what a “quack” is and has been to the doctor in previous segments). So, Elmo cues a video about doctors for him to learn from. The two them play a game where they give a monster kid a checkup with some equipment. After a mishap with a rubber chicken, the duo give a successful checkup. Finally, the two ask Ms. Noodle what a doctor wears. She tries on a clown costume and a baseball uniform before donning some scrubs. Grover And Elmo do the Monster Dance, and the segment ends.

We then get a short scene of Abby and Elmo recapping their work as the Boo Boo Busters, And that’s pretty much it for the episode. It’s over. Go home. Go.

Well, that was Bye Bye Boo Boos (still sounds pretty childish to me). It wasn’t bad for what it was, but it could’ve been so much better. (If they really had to air Hailee’s song in this episode, why not hold it out until later in the season?) As for a rating, I guess I’ll give it a 6/10. Not horrendous, or even moderately bad, but still could’ve work a little harder and got that 7. See you next time. Bye.
Last edited: Dec 3, 2020

Too bad this is the only episode of this season where I don't have a chance of uploading the title card.

In any case, this was a good episode.
A

The cold open with Jen playing a Groucho Marx type doctor was funny. I don't know why the graphic for I Wonder, What if, Let's try was used for Elmo segueing into the Letter of the Day. I liked Grover's joke about a duck being a quack and Elmo not getting it, even looking off-screen and pointing to Grover.

"Bye Bye Boo Boos" premieres on PBS this Wednesday September 15. Tune in and let us know your thoughts.