Nina is measuring how tall Elmo and Rosita are with a growth chart that uses smiley faces. Big Bird wants to see how tall he is, too, but Nina is out of smiley faces. This is a problem! They try a couple of ideas and then wonder what else they can use to measure with. What if they make their own smiley faces? Let’s try! It works. They didn’t give up, and they made more smiley faces to measure Big Bird. (Guest: Hailee Steinfeld) 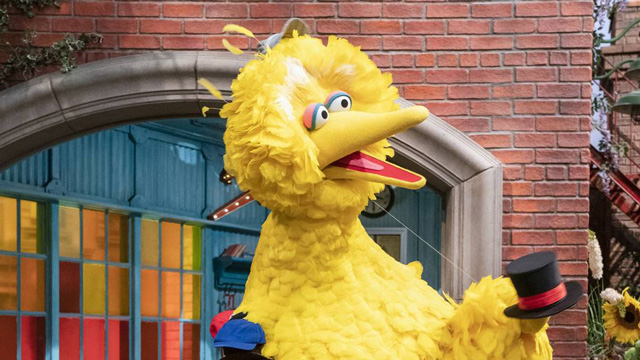 Today is Thanksgiving Day. I am currently locked in my room to prevent my family from making me watch the parade. So while I’m here for the next 3 hours, I might as well give you something out of it. With that said, let’s start the review.

So, Measuring Big Bird. This is gonna be an interesting episode. I know that this will be the debut of the season’s trademark song that they force down your throat until it ends and is replaced by another one the following season. But besides that, will this measure up to the good episodes or the bad episodes. Let's find out, shall we?

The cold open features Elmo and Abby measuring the latter’s plant, which she then makes grow over twice its original size with magic.

The street story begins with Nina measuring Elmo and Rosita with smiley faces (Elmo is 4 smileys tall and Rosita is 5, for those wondering). When Big Bird decides he wants to be measured too, Nina quickly runs out of smiley faces. They are bummed by the problem, but Nina reminds them of the season’s mantra, “I wonder. What if? Let’s try!” I kid you not, they repeat this 5 times in the street story alone. And god knows how much they say it in the song later. The monsters get a ton of random things from the community center to measure Big Bird with, but Nina tells them that to measure something, the things you measure with must be the same size. This isn’t necessarily true, but it’s certainly simpler to measure with same-sized objects.

They then find some blocks to measure with. They get to 5 blocks before they find Cookie Monster has been eating them. He apologizes and gives them the one he was about to eat. However, 6 blocks isn’t enough to measure Big Bird, so they continue to search for things to measure. I love this line Elmo has during the search:

: Elmo found… nothing.
Kinda reminds me of the infamous “Nothing! Absolutely nothing!” line from UHF.
Anyway, they eventually find Grover drawing a portrait of Mr. Johnson (I’m pretty sure this is the first Grover/Mr. Johnson action we’ve had since Street Safari, so it’s a treat). Sadly, we don’t get much from this except for the finished portrait looking exactly like Nina’s smiley faces. This of course inspires the characters to make their own, and after a crafting montage, we finally find that Big Bird is 12 smiley faces tall.

Overall, this was a decent story with some good character variety, including 4 of the 6 (5 of the 7 if you count Rosita as a late addition) core characters. It was fun watching them attempt to find things to measure with, but since the ending was given away in the description, I was waiting for the inevitable moment where the characters decided to make their own smiley faces. I guess it’s about the journey, not the destination, but sometimes the journey felt like padding.

Anyway, after one of those pointless bits that go between the street story and LOTD, we get the Letter of the Day, which is M. Surprisingly for an episode with a celebrity song in it, we get a “letter” segment. This one features a toy robot being measured by a ruler and other different things. This sounds standard for a “Letter” segment, but then they have the balls to add in auto-tune. Great. Honestly, they should’ve cut this out of the episode and replace it with a NOTD segment, especially since measuring sounds like one of the easiest episode themes to turn into one.

But enough of that waste of time, now for an even bigger waste of time. We finally get the debut of Hailee Steinfeld’s anthem for the season. The song reminds me a lot of last season’s “Oops, Whoops, Aha!” song, not just because they serve the same purpose, but because they both mainly take place in the arbor, they have similar “Don’t give up” messages (though executed in somewhat different ways), and I feel they even sound kind of similar. I wasn’t the biggest fan of “Oops, Whoops, Aha” (as you’ll see whenever I review an episode with that song in it), so you can only imagine how I feel about this rehash (though I did like seeing Slimey in it). But really, it doesn’t matter what I just said, because I’m gonna grow to hate it even more as they play it over and over throughout the season. The only reason I didn’t say to remove this bit and replace it with a number segment instead is because they’re probably in some sort of contract deal and had to air it here.

After that, we get a cute bit of Elmo and Big Bird playing “shoe store”, with Elmo as the salesman and Big Bird as the customer. Elmo measures BB’s foot and finds it’s 15 inches long (or “size 15 extra wide” as he says). He gives the Bird some imaginary shoes, and the 2 then introduce Abby’s Amazing Adventures.

Speaking of which, that Segment begins with Rudy (or should I say “King Rudy”) making a block castle, which Basket of course destroys on her way in. She shows them a tape measure, and tells them that they’re gonna build a house today. They arrive at the construction site, and they begin making walls. Baskets reaction to them just beginning to build without reading the directions is decent, but it could’ve (and should’ve) been much funnier. Eventually, they build a house so unstable that it collapses when a leaf touches it. They then check the directions and realize their walls should be 8 feet tall (and god knows how many feet wide). Abby creates magic hands to build the walls, and the structure is complete. Then they need to pick a door. After measuring the door frame, they pick a blue door that’s 6 feet long. The house is done, and the segment ends.

After that, we get the number of the Day. It’s 1, and for the third time in a row, we get nothing Number-related. I think this season is gonna be like season 50 in terms of airing NOTD segments, even though they have plenty of room to put one in. Why they choose to make stupid decisions instead, I guess we’ll never know.

Now for Elmo’s World. I’m sorry, I mean Elmo’s World: Monster Edition (this is gonna take some getting used to). Elmo imagines the 2-Headed Monster measuring themselves and decides to learn about measuring. Cookie Monster appears, only for him to have no idea what measuring is. So they watch a video featuring all different types of measuring (Honestly, I wish they made this episode about all kinds of measures like weight, temperature, and speed instead of just length. Kids need to learn that stuff too.)

After that, they decide to play a game where they try to find something to measure a monster that looks like a pink and gender-bent Cookie Monster. They try using worms and balls, but those don’t work for obvious reasons, and end up using oatmeal containers, which Cookie Monster says remind him of oatmeal cookies because of course, they do. The monsters then ask Mr. Noodle if he knows about measuring. When they see him, Mr. Noodle is trying to fit a large piece of wood through his door. They find it’s too wide to fit (Mr. Noodle’s door is 2 and the wood is 4; they never explain what they’re measuring them in), But it fits perfectly when it goes in longways (we never get a measurement, but I’d say the door is 5 whatever tall). The monsters do the monster dance, and the segment ends.

Finally, we get the closing scene. Big Bird is satisfied with how his measurements came out, and decides to measure Radar next. But the episode ends before we can see that happen.

So that was Measuring Big Bird. Like last week, I was angered by some of the segment choices, disappointed by what we did get, and thinking of what could have been. The street story was fine, however, and the rest certainly had its moments. I was conflicted on what to give this, but I think I’ll be satisfied giving it a 6/10. Can’t wait for next week, especially since I have no idea what’s coming.

I love how Elmo and Big Bird were playing Shoe Store in one scene, right? This probably has something to do with measuring.

TimzUneeverse said:
I love how Elmo and Big Bird were playing Shoe Store in one scene, right? This probably has something to do with measuring.
Click to expand...

Um, I literally said this in my review:

Of course it has to do with measuring.
A

I liked how Nina was hesitant to touch a block that Cookie chewed on. I also liked the bit with Grover and Mr. Johnson, who Grover still calls "sir". The Hallie Steinfeld song was fun. I liked Big Bird knowing how Basket is a character in Amazing Adventures. Basket getting worried about Abby and Rudy building without looking at the plans is something that we don't see often. It's interesting to see Abby sign off at the end of the bit by herself. Cookie asking "What do we do to learn something new? No seriously, me asking" was funny.

I recall seeing a headline around the time people were reacting to Billy Porter taping a spot for the show that read "Is Sesame Street Safe for Kids Anymore?" or something like that.

Episodes like this make me think that author hasn't been watching the show, because it has never been so edgeless. I mean, what a waste of the Grover/Mr. Johnson dynamic.

god, this season has been so dull thus far. although this isn't exactly new for SST in the HBO era, i literally cannot remember a thing that happened in these first three episodes. boring, almost nonexistent plots, bland character interactions, terrible green screen for the Elmo's World bits... honestly the only saving grace is that the episodes are half an hour. oh, and the occasional Don Music cameo, lol.

Froggy Fool said:
...but seriously, can we talk about how bad the Elmo's World bits look??????
Click to expand...

So all of them?

I don't think they look that bad, but I don't get why they shoot Elmo and the co-host on two separate green/bluescreens.

Oscarfan said:
I don't get why they shoot Elmo and the co-host on two separate green/bluescreens.
Click to expand...