Abby, Rudy, Elmo, and Charlie are camping, and just as they’re about to toast marshmallows, they suddenly disappear. This is a mystery! Together, they look and listen for clues as they wonder where their marshmallows could have gone. (Guest: Maggie Rogers) 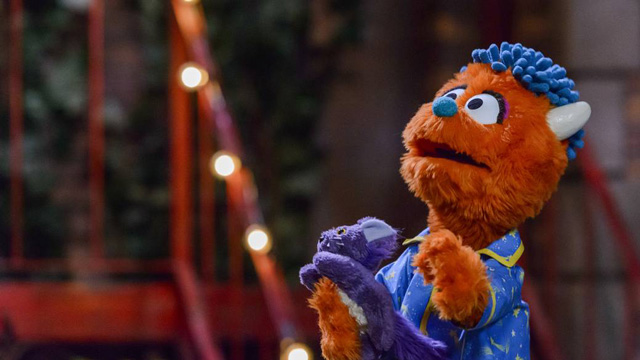 Are there any Apple TV users here? Because I am and I’ve had trouble accessing the episodes from the menu and I wonder if it’s just an Apple TV glitch.

There was something that felt so odd about how this street story was put together (maybe COVID hampered the edit time?) Also not sure what the shadow puppet thing had to do with the "I Wonder...Let's Try" thing.

But hey, nice to see Hoots out and about again. And Don Music making a background cameo in Maggie's song (so many slant rhymes!)

So, Camp Out. An episode with triumphant returns, infuriating segment choices, the season’s first celebrity bit, and a partridge in a pear tree. Pretty much everything but the kitchen sink (and a number segment, but I’ll get to that later). How do these things affect the quality of the episode? Let’s find out.

The cold open features Elmo and Grover trying to talk about nighttime, only to find it’s still the day out. They decide to wait for the sun to go down. They realize it might take a while, but really it’ll happen within a few minutes in “real time”. I found this cold open to be pretty boring. Let’s hope it doesn’t set the tone for the rest of the episode.

So the street story begins with Alan struggling to set up a tent, which I found kinda funny. Apparently, he, Elmo, Abby, and Rudy (and eventually Charlie And her mom) are camping out. Rudy wants to see a shooting star, and even has them all over his pajamas. This is actually a bigger part of the episode than what is in the description. Eventually, the sun goes down, and their camp out begins. They decide to roast marshmallows, so Alan And Charlie’s mom set up a fire. The kids then hear a saxophone, which turns out to be coming from Hoots the Owl! Yes, you read that right, Hoots has a cameo (and a speaking cameo at that) in this episode. His cameo is sadly kinda pointless, but nice nonetheless.
On a side note, I think Hoots sounds really good. His new performer Chris Hayes must’ve known a thing or two about the character because he sounds almost exactly like Kevin.
Anyway, the kids then see that their marshmallows disappeared. Elmo recalls hearing a sound before they vanished, and Charlie notices some animal tracks. They eventually find that some raccoons took their marshmallows, and since these are Sesame Street raccoons and not real ones, they apologize. Elmo then invites the raccoons to roast marshmallows with them for some reason. I did notice the little detail that the raccoons burnt their marshmallows. Gotta love Sesame Street’s attention to detail.
Anyway, they all (except the raccoons) decide to look at the stars. Charlie sees a shooting star, but Rudy misses it. Eventually, they all decide to go to bed, but Rudy finally sees a shooting star before he does.
Overall, this Street story felt like it was focused in the wrong place. The missing marshmallow mystery from the description only took up a minute of the episode, and the shooting star plot seemingly came out of nowhere. That said, it was nice to see Hoots again, and I will admit I felt a little sad for Rudy when he missed the first shooting star.

Next is one of those forgettable filler segments that come between the street story and LOTD. I don’t even remember the name of this one, but I do remember they were talking about making shadow puppets. I will admit I liked it when Elmo used his whole body as a shadow puppet, probably because his fingers don’t move.

But enough of that waste of time, now for the letter of the day. It’s N, and we thankfully don’t get one of those dumb “Letter” segments. Instead, we get a celebrity song. Better talk about it.
In the HBO era, whenever a celebrity was brought on to sing a song, it usually came directly after the LOTD. This indicates the Max era will probably not be different. Also similar is that I have no idea who the singer is. However, the song itself sounds pleasing (even though most of the lyrics barely rhyme), and I loved the cameos from all the SST Muppets. I noticed Elmo, Louie, Bert, Ernie, the raccoons from the street story, Abby, Don Music, Oscar, Hoots (who also played saxophone for the song), a coyote, some bats (which may or may not be the Count’s), a cat, Rosita, Zoe, and Big Bird.

Speaking of him, following the song, we see Big Bird in his nest, with Elmo walking past. They hear some music, which leads to...
Smart Cookies. This one is the one where they try to stop the Crumb’s Ginger Snap from exploding all over the king’s bed. I already reviewed this one (surprisingly the first time I found a repeat segment on my show), so check out my review of “Bedtime Story” if you wanna hear my thoughts.

Look, I got excited when I saw that they didn’t cut to EW immediately following the NOTD, but they didn’t cut to a number segment either. Nope, instead of getting a segment about nighttime and the number 3, we get an animated music video of Twinkle Twinkle Little Star.
Despite my frustration with their decision, I honestly don’t hate this bit. It’s cute, well-animated (it was made by the same guys behind “D for Dinosaur” and “F for Fairy Tale”, both of Which I really like), and the rendition of the song is sweet. I’d say it reminds me a little of those stupid YouTube Nursery Rhyme videos, but actually, this segment is 7 years old, long before those videos dominated YT Kids. I just wish they played a number 3 segment instead. Heck, 3 Balls/Rings/Pins could’ve worked on a technicality.

But enough of what could have been, now back to what already is. In this case, another installment of Elmo’s World: Monster Edition, this one featuring guest star Grover! It begins with Elmo imagining the 2-Headed Monster getting ready for bed (by the way, the graphics in these EW: ME segments look really similar to the animation from the Monster at the End of this Story special), which makes Elmo want to learn more about nighttime. Enter Grover, a self-proclaimed “expert on nighttime”. As you’d expect, he knows nothing about nighttime, leading Elmo to cue a video about it. Following the video, we get this funny exchange:

: Does Grover wanna Play a game with Elmo?

: Well, Yes, of course I do.
They play a game where they help a little monster girl get ready for bed, and ask Mr. Noodle’s Brother, Mr. Noodle what he does at nighttime. I liked the part where he was lounging in a beach chair and pouring water from a watering can into a bucket. The monsters do the Monster Dance, and the segment ends.

Overall, the street story was a mixed bag, the EW: ME was decent, the song was pretty good, I liked seeing Hoots again, and the lack of a number segment was disappointing. Overall, I give it a 7/10. Good, but it could’ve been better. Stay tuned for next week, when I review the debut of this season’s token “song we repeat so much thought out the season that you’d eventually rather be tied to a chair and kicked down the stairs”. Bye.
Last edited: Nov 20, 2020

I loved how Elmo met Big Bird in one scene, but at daytime.
A

I really like Jen Barnhart playing a recurring human. Hoots is always welcome. Tyler and Pam's performances as the raccoons was fun. I liked Elmo pretending to be a giant in the shadow puppet bit. I liked Maggie Rogers' song especially Don Music's cameo. I guess the short bit with Big Bird and Elmo is how they'll introduce anything that they don't make anymore. Grover was funny in EW: "It's the opposite of daytime. That's a good start."

antsamthompson9 said:
I guess the short bit with Big Bird and Elmo is how they'll introduce anything that they don't make anymore.
Click to expand...

Makes sense to me (at least Smart Cookies repeats, not sure about any others). I guess that’s why it didn’t relate to the “nighttime” theme.

"Camp Out" premieres on PBS this Wednesday September 8. Tune in and let us know your thoughts.

Season 51 episodes are also available to stream online at pbskids.org/sesame for a limited time.

Oscarfan said:
There was something that felt so odd about how this street story was put together (maybe COVID hampered the edit time?) Also not sure what the shadow puppet thing had to do with the "I Wonder...Let's Try" thing.

But hey, nice to see Hoots out and about again. And Don Music making a background cameo in Maggie's song (so many slant rhymes!)
Click to expand...

I thought it was interesting that Hoots and Elmo could interact now that they have separate performers.

CoolGuy1013 said:
Overall, the street story was a mixed bag, the EW: ME was decent, the song was pretty good, I liked seeing Hoots again, and the lack of a number segment was disappointing. Overall, I give it a 7/10. Good, but it could’ve been better. Stay tuned for next week, when I review the debut of this season’s token “song we repeat so much thought out the season that you’d eventually rather be tied to a chair and kicked down the stairs”. Bye.
Click to expand...

Yeah, it did seem like Muppets doing stuff rather than an actual plot, kind of like a "Countryside Bears" type of deal. Long story there.

So I may be without HBO Max for a while longer. My girlfriend's been having vision problems and may not be able to help me get streaming services on my TV, so it's back to waiting about a year until the eps air on PBS again. Oh, well. Someday I'll catch up to the rest of you.
You must log in or register to reply here.
Share:
Facebook Twitter Reddit Pinterest Tumblr WhatsApp Email Link
Top