Lily, a four-year-old tiger cub from China, joins Chamki, Zuzu and all their new friends for an international food festival on Sesame Street, and they learn about traditional dishes from Japan, South Africa, India and China. Rudy is reluctant to try the unfamiliar foods, but is pleasantly surprised when Elmo, Abby and Chris encourage him to taste a few. Guest: Padma Lakshmi. 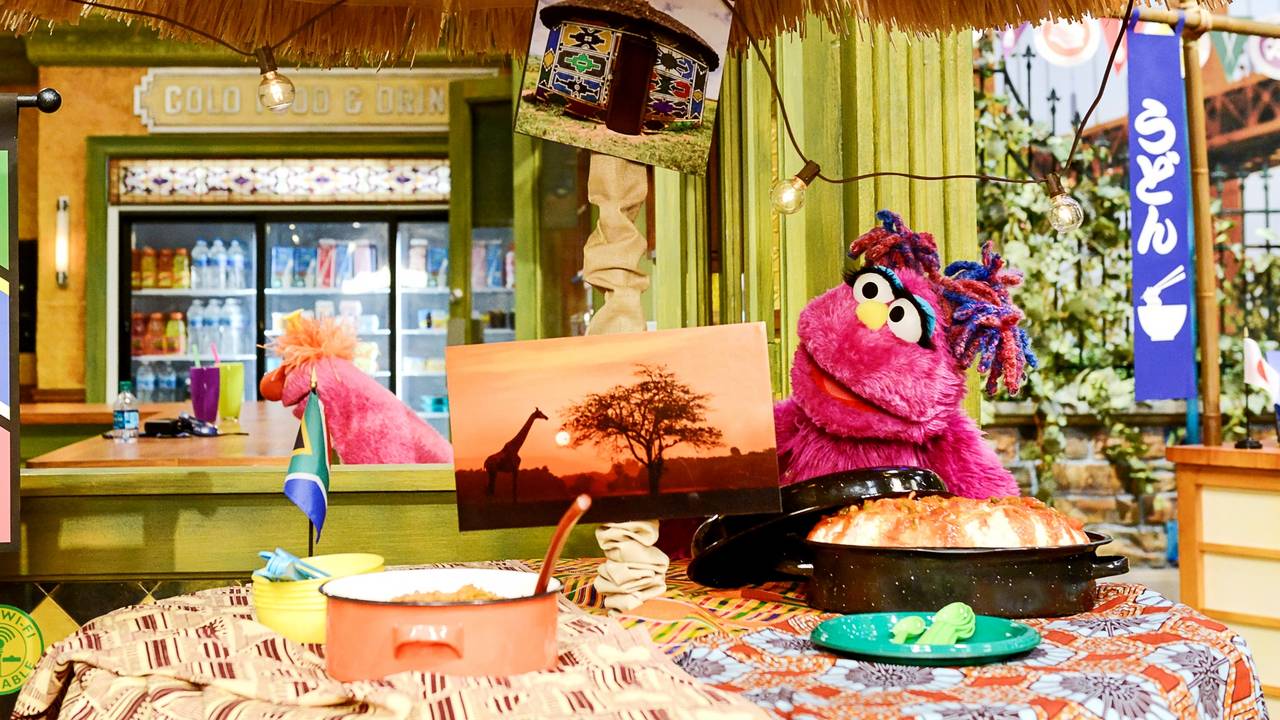 A fine street plot. Rudy's feeling more of an everykid than Elmo. Nice to see all the international girls and hey! Herry Monster! Speaking words!

Not sure I buy the whole "trying new foods is kind" Kindness Cam thing.

The "Sesame Chef" thing was cute and funny; felt a little choppy though. But ugh, the shoehorned "F is for Food" nonsense around it. I don't think every episode needs the letter to directly connect to the theme of the ep. Why not make it sponsored by the letter M and have a cartoon about M foods? It makes their entire fight for 26 episodes years ago (because of the 26 letters) entirely meaningless.

The street story had its pros and cons . . . the pros were we had a really nice assortment of characters, not just the internation characters we've seen previously this month with the traditional foods of their cultures, but we also had a nice assortment of local characters as well - the cameo (and speaking role) by Herry Monster was a nice treat. Was that Matt Vogel making an on-screen cameo in the back as the pizza tosser? Couldn't tell, but it kind of looked like him. I also think it's a nice touch that the show has been exhibiting Alan's Japanese-American heritage as of late.

The cons, on the other hand, Rudy's plot device of being afraid to try different foods from different cultures because he's never heard of them before is something that's been done a million times on other kids shows (including WIMZIE'S HOUSE, which is often accused of being a Muppet rip-off), and it wasn't executed well either - that much felt like just filler to pad out the time. That and, I'm sorry, but I'm still having trouble adusting to Jen's Zoe.

I'll agree the Sesame Chef bit was amusing, especially seeing what Elmo, Cookie, Prairie, and Oscar made with cheese, and each of their dishes befit their personalities perfectly - especially how Prairie constructed a miniature castle made out of cheese that was meant for looking at and not eating. I can't imagine Elmo's cheese and banana . . . whatever would be appetizing. I'll also agree, the "F is for food" angle shoe-horned in.

We also had one of the better Monster Foodies bits in this one as well, though I wouldn't know tacos are healthy . . . but either way, it was nice enough.
A

The street story was pretty good. It was wonderful to see Herry speak on the show for the first time since 2003. The bit with Padma Lakshmi was funny. I laugh loud during the Foodie Truck bit where Cookie thought Gonger told him to eat the taco shells. Also, this time Cookie shared the food with Gonger and we got to see him do "Om nom nom".