In this special Halloween episode, the letter of the day is "H" (for "Halloween"), Cookie Monster discovers "The Walking Gingerbread" (a parody of "The Walking Dead") and Elmo learns that a good imagination is the most important part of pretending.

This episode features an all-new street story and doesn't include Elmo the Musical or Elmo's World. 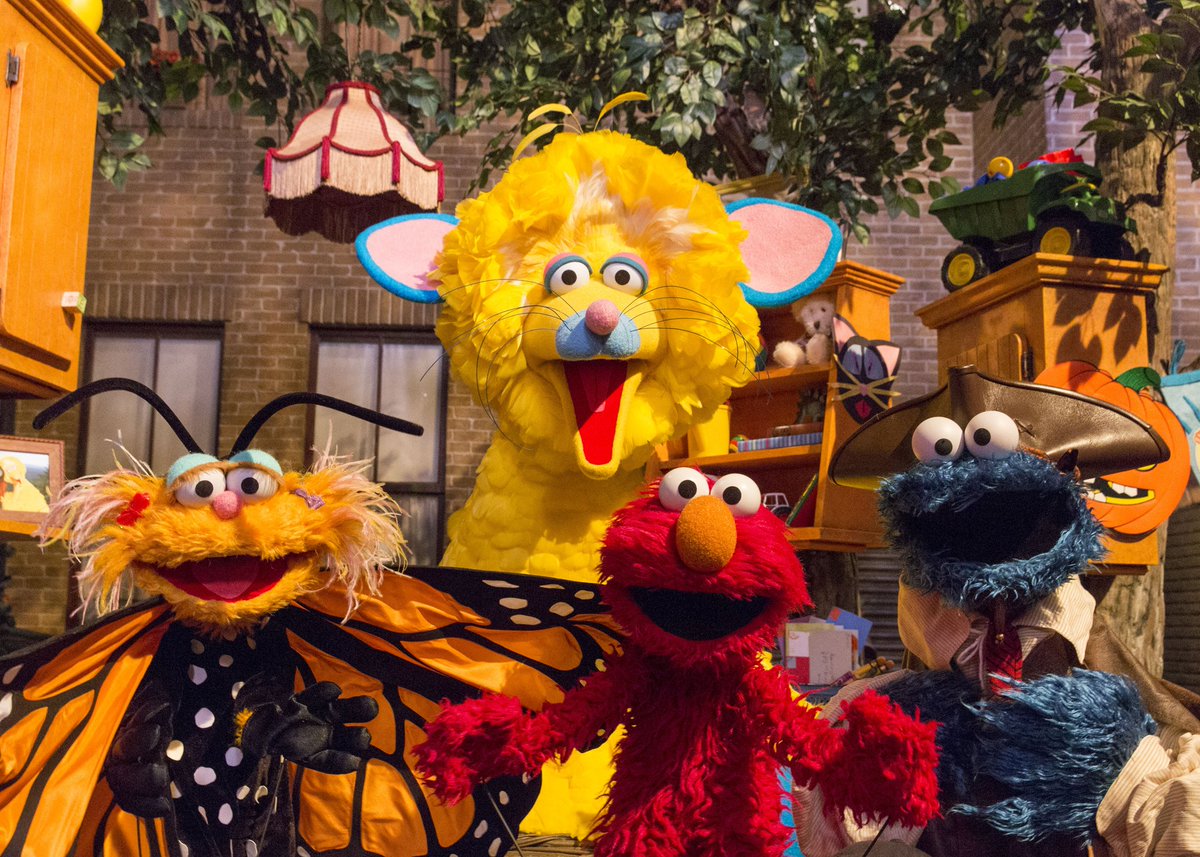 This was a pleasant surprise. And all this time I was thinking they were adding just a Halloween song to the Snazzy Society repackage. Still weird that's what the TV listings said.

Pretty good for an Elmo and Abby episode. I like that Elmo was able to get angry and jealous in this episode. Is...is it wrong that I'm starting to prefer Ryan's Elmo over Kevin's? I really can't blame him for the fact that Elmo rarely emoted after a while, though. Please tell me it's not just me who thinks that Irwin was a stand in or expy for Walter, considering it's Peter? Kinda wish there was more stuff for other characters to do in this one, but glad they at least made cameos. Speaking of, yay! Martian Yip Yip cameo. Also loved the joke about how the Martians don't have their own word for meatballs, so they use an English cognate. Nice little gag if you watch enough foreign language media. Those English words that pop up always sound awkward.

The big surprise was the surprise Crumby Pictures Walking Dead skit. I know it's not officially one, even though it basically was the same lesson from the Star Smores bit. Nice to know there was one spoof segment that they left for this episode. I barely get any references since I don't watch that series, but it looks like they at least did some research on this one.

EDIT: forgot to mention the one thing here. I do not believe for a second that even in the universe of Sesame Street an out of the box store bought costume would be that authentic and better than a home made one. Unless Irwin's mom is that well to do that she can clearly buy things from the Sharper Image catalog.

I love how this was the big finale episode of Season 46 with all the main characters expect for Snuffy were in the background or had a line or two. I didn't even expect Grover or the Yip-Yip Martian have a cameo. Also I love The Walking Gingerbread parody with Cookie Monster as Rick.
D

Did anyone else besides me feel like Big Bird's mouse costume was just an ever-so-slightly subtle nod to Tutter? I kind of felt that way.

Another one of my favorite bits was Cookie dressing in different costumes to try and get more pumpkin cookies from Nina.

Out of all the different costumes, I think I liked Alan's Elvis costume the best. Abby's cup of cocoa costume was cute and something different, but I do like how in the end, Elmo and Irwin were able to find some common ground with their imaginations, eliminating the jealousy they felt towards each other.

I'm just glad they took the time to actually make the street look like fall for Halloween, since the Valentine's episode earlier in the season looked as if it took place in the dead of summer.

I missed the Crumby Pictures though, but I did notice there was no EW or ETM in this one.

Wow. See? This was exactly what I was talking about. Without a tacked-on ETM or EW, look what they could fit in. A longer street story, couple more segments (I liked that "Pumpkin Face" cartoon) and even a short, second street scene. It's too bad the rest of the cast was relegated to cameos, but at least they were there in some capacity.

I didn't think that Walking Dead spoof was gonna air, but cool. I don't know if it was intended to be a Crumby Pictures bit or not, since those were exclusively films.
Last edited: Oct 29, 2016

Ooh, I wanna see it sooo bad! This sounds like the best episodes of the season.

Also, I saw the spanish version of the trailer. How come the talking is dubbed into Spanish, but not the songs? Seems it would be pretty confusing to non- English speaking viewers:

Didn't watch this... But based on the posts here it sounds like

used the Garfieldian method for best possible trick-or-treating results. Will probably learn about Irwin and the Walking Dead spoof at the Wiki.

Pig's Laundry said:
Also, I saw the spanish version of the trailer. How come the talking is dubbed into Spanish, but not the songs? Seems it would be pretty confusing to non- English speaking viewers:

It's easier and quicker to keep songs untranslated. There's a fair amount of language gymnastics involved to getting the lyrics to make sense, fit the melody as best they can, in cases make it rhyme (something that's not necessary in certain languages) and sound as acceptable as possible. Some foreign dubs just put subtitles over songs, some actually bother to translate. I remember a Plaza Sesamo episode where they just didn't bother with "I Believe in Little Things" and turned it into a spoken word poem over the melody.

D'Snowth said:
Did anyone else besides me feel like Big Bird's mouse costume was just an ever-so-slightly subtle nod to Tutter? I kind of felt that way.
Click to expand...

I'm glad I'm not the only one. Don't know why I didn't bother to mention it. I guess we'd need official confirmation that it's a reference to go any further than that, though.


Oscarfan said:
Wow. See? This was exactly what I was talking about. Without a tacked-on ETM or EW, look what they could fit in. A longer street story, couple more segments (I liked that "Pumpkin Face" cartoon) and even a short, second street scene. It's too bad the rest of the cast was relegated to cameos, but at least they were there in some capacity.
Click to expand...

I'd at least hope the new shortform Elmo's World segments don't intrude that much on the show. I agree, this is the best put together episode I've seen this season, and that was all due to not forcing an Elmo segment into the end. An Elmo song and a street scene call back with Elmo, but no separate Elmo segments. I liked actually seeing a letter and number segment after the songs, something that shouldn't be that rare.

What I really liked about the Walking Gingerbread segment was that they were able to make the "crumbies" unsettling but not scary. They did have dead eyes and looked very...awkward when they were eating cookies (I like the close ups they kept doing). It's hard to get a balance of creepy and little kid friendly when it comes to Halloween kid's shows, but I'm glad they pulled it off. mild peril and all that.
A

Could someone please upload this episode to YT or Vimeo or something? I would've thought some website on the Internet would have it by now, but I can't find it.