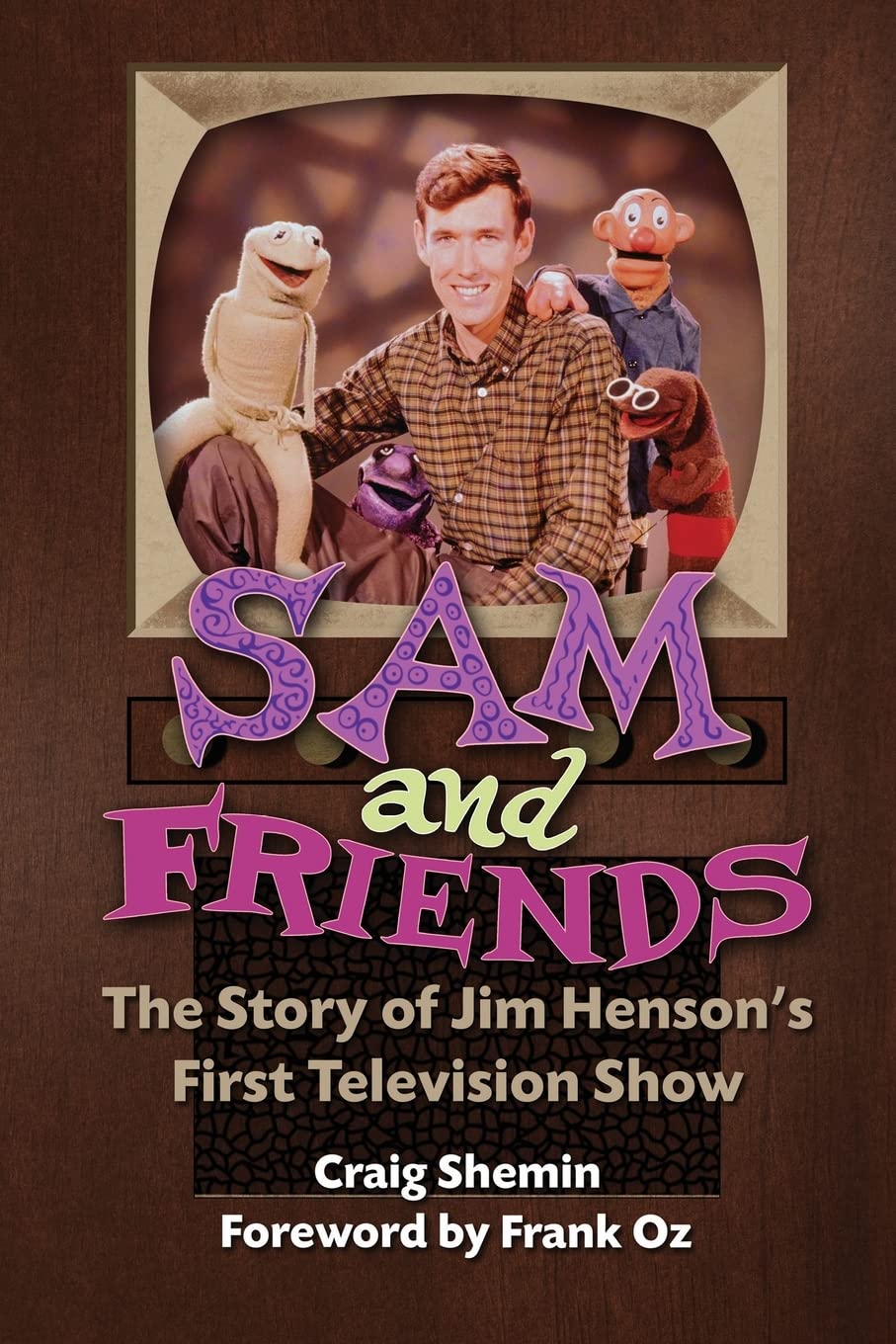 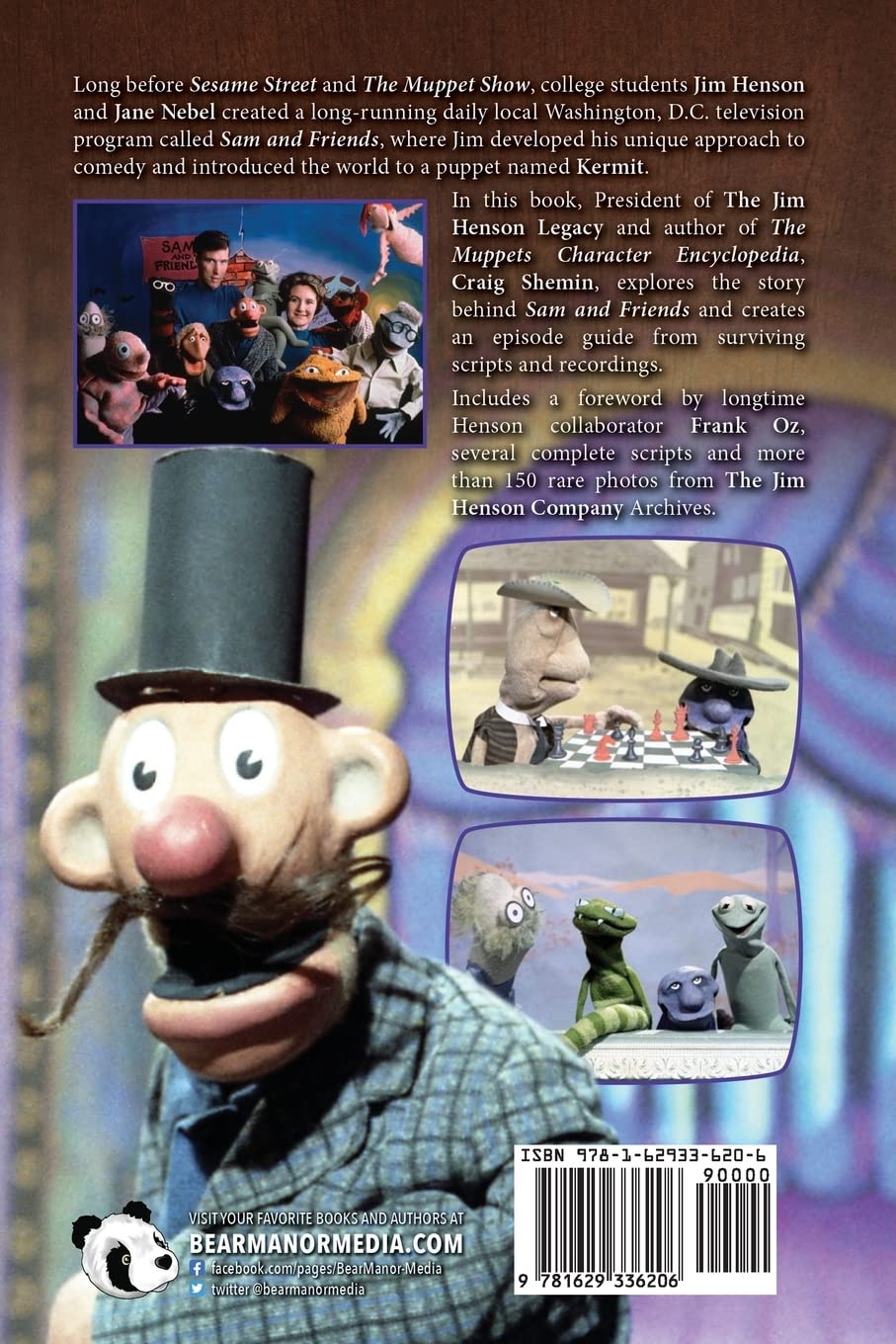 While casual Muppet fans may not be familiar with Jim Henson’s first television series, Sam and Friends (1955-1961), most devoted fans are. The weekday program usually ran for five minutes twice a day and was Jim’s first television series that premiered when he was only 18 years old in May 1955. The show aired in Washington, D.C. on the local NBC channel, WRC-TV, and later on WBAL-TV in Baltimore beginning in 1958. Sam and Friends successful run continued for six and a half years until December 1961.

Most fans who weren’t lucky enough to grow up in Washington, D.C. in the 1950s, likely first saw Sam and Friends either through The Art of the Muppets (1979) traveling exhibit and book of the same name or later on a Muppet special or Jim Henson documentary. Since there are only fifteen surviving shows on video from the era of live TV, many of the show’s segments and sketches, outside of a few famous notable exceptions have remained mostly unknown. Until now.


Jerry Juhl, Jim Henson, and Jane Henson with the cast of Sam and Friends.

Craig Shemin, a lifelong Muppet fan himself, Muppet historian, President of The Jim Henson Legacy, and all-around great guy, has compiled a thorough and fascinating history of the series. The comprehensive 606-page book is divided into two sections “The Sam and Friends Story” and “The Sam and Friends Episode Guide” compiled from surviving video footage, scripts, and over 400 recently discovered reel-to-reel audio recordings from the pioneering television program. These precious audio recordings became the key that would make the episode guide as complete as possible. Muppet fan artist Dave Hulteen Jr. (@Vic Romano) illustrated the cover.

The book begins with a forward from Muppet maestro, director, and living legend, Frank Oz, who Jim Henson himself referred to as the most talented puppeteer in the world during the heyday of The Muppet Show (1976-1981). Frank recalls in detail the first time he saw Jim’s work on a television commercial for Calso Water when he was only 17. Little did Frank know he would join the Muppets two years later in 1963. While Frank could write a fascinating book of his own all about Jim Henson, Frank sufficiently sums up Jim Henson and the Muppets best with three words: “controlled, affectionate anarchy.”

Sam and Friends aired primarily during Jim Henson’s college years. The show was both experimental as Jim Henson was inventing a new form of puppetry for television, but it was also foundational as the same style of sketches and parodies would continue to be performed and evolve decades later. Shemin explains that even though songs were lip-synced to popular records, and all audio was usually pre-recorded before the broadcast, the show was performed live (mistakes and all).

Detailed descriptions of each of the Sam and Friends characters are included with plenty of photos throughout. Featured in the book are quotes from a wide array of sources. For example, Jane Henson recalled a description of Sam, the main character on the show. “[Sam] was the only human because the whole thing was about how a human, a simple human, reacts to life. And all the other characters were like things going on in his head. That’s the design of it. The friends are within him, within Sam. And they’re abstractions.” 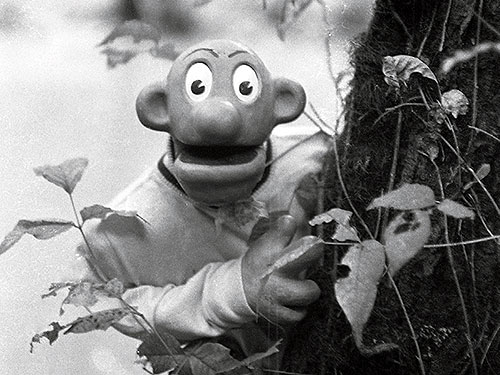 Sam, the only human Muppet on Sam and Friends.

Kermit, who was originally milky turquoise (not green) and contrary to legend, was not named intentionally for his boyhood friend, T. Kermit Scott, from Leeland, Mississippi. Nonetheless, Jim loved the flexibility and subtlety of performing Kermit and by 1957 he would become Jim’s favorite character. Kermit would often be seen onscreen, as Kermeena when a feminine character was needed.

The shining stars of the book are undoubtedly Jim and Jane. While Jim’s story is well-known, Jane’s isn’t. Throughout her life, Jane Henson was always incredibly humble about her involvement with the Muppets. However, she was Jim’s first hire years before they married, and was also an accomplished artist in her own right. Jane had a spiritual aspect to her work that helped balance Jim’s whimsy. When Jim traveled to Europe in 1958, he entrusted Jane to run Sam and Friends in his absence. If Jim was the heart of the Muppets, Jane might have been their soul. It’s delightful to see her finally receive the acknowledgments she deserved for her massive contributions that would lay the foundation of the Muppets for decades to come.


Jane Henson on the Salt set of Sam and Friends.

Devoted fans will love the nuggets of new information including recollections of how Sam and Friends was canceled multiple times (and quickly returned), the Muppets' first performances with a human (Paul Arnold), and a retelling of the Muppets' first national appearance on Tonight on October 11, 1956, performing “I’ve Grown Accustomed to Your Face” by Rosemary Clooney, and “The Great Pretender” by Stan Freberg.

Shemin also recalls how the Sam and Friends characters slowly each found their own voice. He also details the Muppets' foray into commercials, which provided a significant stream of revenue and promotion for the characters. WRC-TV was one of five NBC affiliates in America to begin broadcasting in color, so Sam and Friends transitioned as well shortly later in 1959.

The book includes five scripts from the series in a side-by-side format with one side being in Jim’s handwriting and the second side being the final broadcast copy. 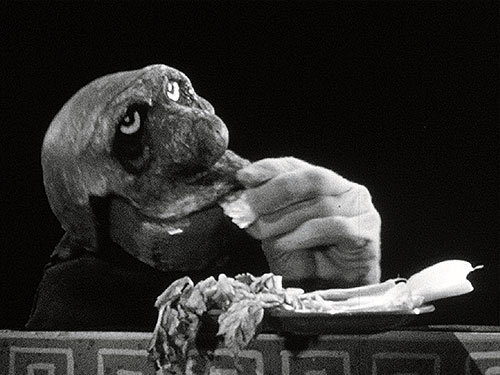 Yorick was the first of many ravenous Muppet monsters.

After Sam and Friends final cancellation in December 1961, Shemin takes readers on an abbreviated Muppet history tour through the following decades making particular note of appearances by the Sam and Friends characters who slowly drifted into obscurity, outside of Kermit of course.

The Sam and Friends book is a pure delight from start to finish. The archival photos, recollections, summaries, and scripts are a Muppet fan’s map to a long-lost treasure. While many of the surviving video kinescopes exist on YouTube and there are undoubtedly music rights to be cleared, in the future it would be great to finally see an official video release of Jim Henson’s early works restored for generations to come.

The Sam and Friends book will be available in hardback, and paperback on Jim Henson’s 86th birthday on September 24, 2022. 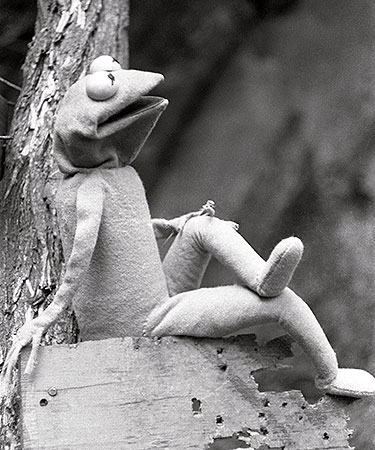 Kermit sits on a log for possibly the first time in the 1950s.

Editor’s Note: We were told by both the publisher, Bear Manor Media, and the author, Craig Shemin himself, to expect a delay of up to two weeks until the hardback books are in stock. The paperback version will be available as scheduled on September 24, 2022.

While it would be great if they could put out a DVD of all the surviving episodes (or at least all the ones that don't need clearances plus the ones they can clear), I've started thinking there should be a book of Sam and Friends scripts. And since it seems like many of the audio tracks still exist, an album of those would also be great.
M

I got the book yesterday. I've been going all over the book, to various parts.

In the credits section, I always thought Jim Henson directed the show, and was surprised to see others listed as directors (with Jim Henson not listed at all). Jim Henson: The Works gave me the impression that he (and Jane) did everything except operate the camera.

I am a little confused by the broadcast history chapter. It looks like there may have been times the show was longer than five minutes, not sure if these instances are referring to the shows that were on before Sam and Friends or what.

I am surprised to hear about Paul Arnold as a host, but it makes sense since the Muppets originally lip synched only. I often wondered if it was easy for viewers to know the names of the characters, or at least which one Sam was, if they went the first few years without their own voices.
M

One thing I wonder, and so far I haven’t seen anything in the book to indicate this, is if Pierre the French Rat appeared on Sam and Friends. I have seen some places on the official Henson site that say Pierre did appear, but then you never see him in any vintage photos with the cast. There’s no surviving footage of him (not that strange). There is an old newspaper article that talked about the show's cast and when they were built, yet Pierre is not in that article. I haven’t read the whole episode guide but so far I have not seen any episode entries that mention him. He is in the characters chapter but it’s not quite the same.

The chapter on characters lists what month and year many but not all the friends were built, clearly using the newspaper article (or the wiki) as a source. I also like that it lists the registered copyright information on some but it does not list it for later Muppets. I know those documents of the Disney sale that were posted on a blog list many of the Sam and Friends characters, makes me wonder if later ones were properly copyrighted (but did Craig Shemin look at the legal document book or did he look at other copyright sources?).

Looking at the copyright info at the start of the book, it mentions copyright to Disney for the Muppets but also mentions “characters” when associating Henson’s copyrights. I know Shemin has said that Disney owns the Sam and Friends Muppets but needs permission from Henson’s estate. It is also interesting seeing copyright details for Sam and Friends, not something you see often.

It was also interesting seeing some photos of the puppet set for Circle 4 Ranch. It’s a shame, as far as I could tell, there were no puppets in those. Would have been great to finally see photos of the Longhorn and Shorthorn puppets.

Here's a great feature story on the Sam and Friends book from WRC-TV, the NBC affiliate in Washington.