D'Snowth said:
So Fox News never cared that Trump wouldn't wear a mask, and even touted how ****** he looked the one or two occasions he actually wore one, but they take issue whenever Biden is without a mask? Gotta love their blatant and obvious biased hypocrisy.

At least CNN has suspended Chris Cuomo after it came to light that he had secretly been helping Andrew out during his sexual harassment scandal, which, once again, goes to show that what Al Franken says is pretty much true: say what you will about the left, but at least they will hold their own accountable for their poor judgment if they have to . . . the right? Nope. It doesn't matter how horrendously questionable their words or actions are, they just give each other free passes to keep on going without consequence. Not that I agree with Franken that the Dems should give him a free pass since the Reps always give their own free passes, but still, it shows how terribly unbalanced all of this is.

Does this really need to be explained? President Trump never called for mask mandates nor did he ever push wearing masks on everybody. So him not wearing a mask was right in line with what he was telling (or not telling) every one else. President Biden and his administration, on the other hand, are calling for mask mandates for government employees, the military, businesses with over 100 employees, etc. So when he doesn't wear a mask it is the blatant hypocrisy you talk about. It's not the not wearing the mask part. It's the hypocrisy part he is getting criticized for. Not really that hard for most to understand.

Omar and Talib both support BDC which is an anti-Israeli group. Both hated Trump specifically because he’s the most pro-Israel president we had since Eisenhower. Earlier this year Israel was being bombed by Syria and Palestine, Talib, who is Palestinian, knew where her allegiance lay.

fuzzygobo said:
Omar and Talib both support BDC which is an anti-Israeli group. Both hated Trump specifically because he’s the most pro-Israel president we had since Eisenhower. Earlier this year Israel was being bombed by Syria and Palestine, Talib, who is Palestinian, knew where her allegiance lay.
Click to expand...

I wouldn't really say that being critical of Israel is anti-semitism, that's sort of the same type of logic the Democrats use to brand everyone a racist if they have a critique of Obama or Kamala. But, I'll have to look more into their actual comments because I'm not fully caught up. Thanks for providing some examples though.

Was too young to vote for him but I was a big fan of Obama as a kid. I think in middle or elementary school I wrote an assignment about how I looked up to him. And then I grew up and realized he was just another phony politician who backed the war machine, mocked Flint residents who were in desperate need of clean drinking water, and bailed out Wall Street. Trump, Biden, Bush, Obama, it's all the same corruption in a different package.

The thing is people literally think the President they support is going to completely magically solve all their problems.

No. No. That’s not how life works.

Just to clarify, I don’t fully agree with the jokes Dave was making on the trans community because some of them really come off in poor taste, but Jesus Christ this really is so accurate. 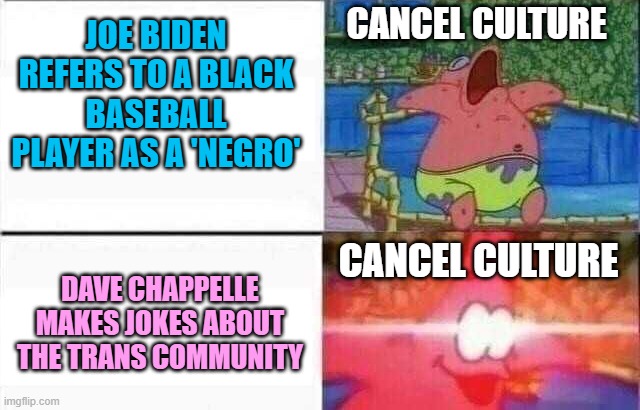 Muppet Master said:
Eh not really. Chris Cuomo was only held accountable once the news became public and CNN could no longer cover for him. Same thing happened when Fox News fired Bill O'Reily. And if dems held their own accountable, they wouldn't have made Biden their nominee, a guy with a storied history of sexual misconduct allegations and blatant racism.
Click to expand...

Well, remember. Your melanin determines who you can vote for, am I right?

LittleJerry92 said:
Just to clarify, I don’t fully agree with the jokes Dave was making on the trans community because some of them really come off in poor taste, but Jesus Christ this really is so accurate.

Honestly, I feel like a lot of the people criticizing Dave Chappelle didn't actually watch the Closer special in full, especially the story he tells at the very end about how his trans friend committed suicide after being bullied by people in her own community.

Not necessarily. I voted for Obama in 2008. He had a good pitch, and a lot of people thought we could be united as a country.

That hope lasted about 16 minutes and 33 seconds. Just enough time to put a pizza in the oven. By 2012 the dividing line was getting wider. Mitt Romney , who nobody ever heard of before running against Obama, was the devil incarnate. That sparked the attitude that continues in the left today. “If you don’t agree with me, you’re not only wrong, you’re evil!”

It is amazing in 2016 and 2020 how many blacks and Hispanics voted for Trump.

Same with Biden. On Inauguration Day, the media were gushing all over Captain Unity, standing beside the reflecting pool in Washington, how all people will bond together Uber his wing.
Except for THOSE people. The ones with those evil red hats..