The phrases broken record or beating a dead horse come to mind.

It would be nice to be able to discuss political issues without the constant interruptions of "but Reublicans". They contribute nothing.

fuzzygobo said:
Wouldn’t it be nice to see whenever these “Reps wail against Biden” posts come up, there would be ONE name attached to it? Just to lend a shred of credibility? But some things are too much to hope for
No, Biden owns this one. His original thought was to have all troops out by the anniversary of 9/11. But he went about it in such a haphazard way, thousands of Americans are still stranded there, and with each passing day their fate looks more bleak.

One thing Biden can do. He still has fifty thousand troops stationed in Germany. They could be deployed to help the stranded.

If there are still any Americans or allies still in Afghanistan after August 31, what do you think will happen?

Like I've said before, I have no problem with us leaving Afghanistan. But this fubar from the very beginning
If we are withdrawing from there, you don't close Bagram AFB first and pull out troops before you get the civilians out. And you leave a small military presence behind to prevent the taliban from overrunning the country. And then he compounds the error by putting troops back in when the original troops were dug in and familiar with the country's terrain and culture and power structures.
And now he's talking about getting back at ISIS who did this. How do you suppose he is going to do this other than sending troops into Afghanistan?

Which defeats the whole purpose of withdrawing in the first place. I agree we should pull out, but get people out in this order;
1. Civilians
2. Afghan allies
3. Military
Biden brags about being a student of history.
In 1975 Americans were airlifted out of Saigon. Within two years South Vietnam fell to the Communists.
I’m afraid Afghanistan will fall much faster.

Reps anytime Trump did something stupid for four years: THIS IS ALL OBAMA'S FAULT!!!
Click to expand...

This is how silly it really is.

(Sorry it's not in the form of a cute little meme) 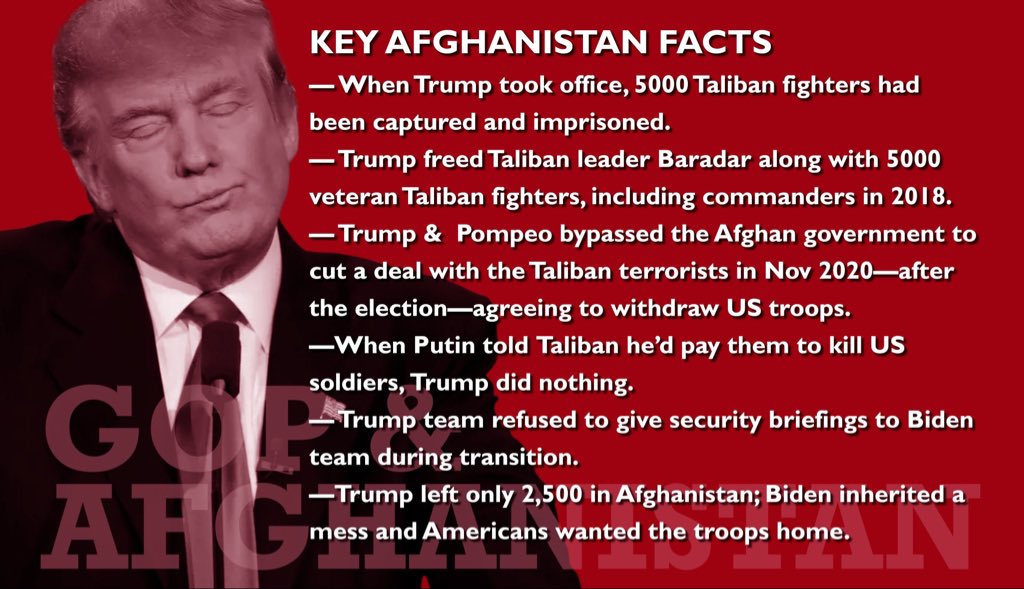 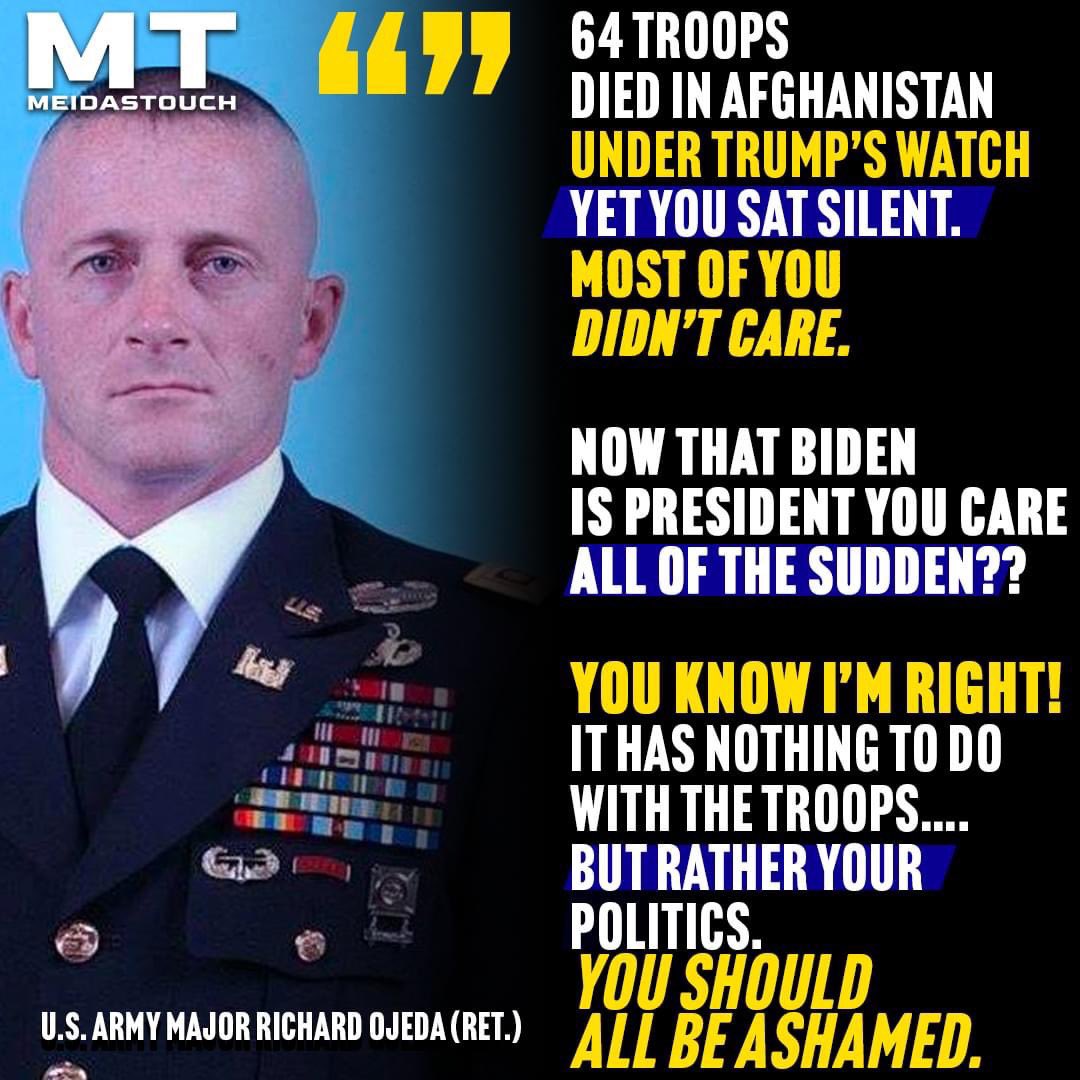 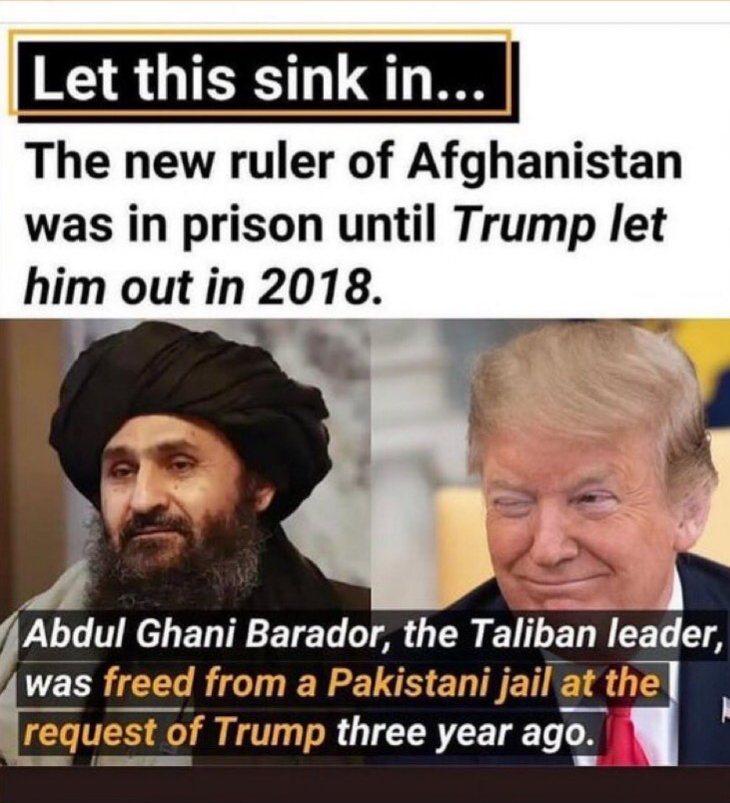 Can someone remind me again who the CURRENT President is? I don't think someone got the memo

I'm glad we are out of Afghanistan. But the way it was done was done about as poorly as possible.

First, you don't close Bagram AFB and send home troops before you evacuate civilians. How does that make sense?

Second, the Taliban actually offered the U.S. control of Kabul security and we turned them down. If we had control of Kabul and the airport we could have gotten anyone out we wanted to get out. Part of President Trump's deal with the Taliban was that they could not enter Kabul until we were out.

Third, who in their right minds puts the Taliban in charge of security outside of the airport? We actually trusted a known terrorist group as security for our troops!

And fourth, we still left behind some 300+ American citizens and who knows how many allies.

President Trump wasn't in a position to make these calls. Remember? He was voted out of office last November and President Biden took over in January. It was his call. And he ignored all advice from his military advisors and state department to leave behind a small force.

During a press conference on Monday, the commander of US Central Command, General Kenneth McKenzie, said that the US' evacuation mission and military presence in Afghanistan had ended and that the US "did not get everyone out that we wanted."

Gen. McKenzie said that 1,000-1,500 Afghans had been flown out of the country in the last 24 hours and in total, over the last weeks, 123,000 people had been evacuated in total. Those evacuations were conducted with a coalition of countries, he said.

"I'm here to announce the completion of our withdrawal from Afghanistan," Gen. Kenneth McKenzie said. "The end of the nearly 20-year mission that began in Afghanistan shortly after September 11, 2001."

"Every single US service member is now out of Afghanistan. I can say that with 100% certainty," McKenzie added.

The number of American citizens left behind was in the "very low hundreds" McKenzie said. It's unclear how many Afghan allies were left behind.

"The military phase of this operation is ended," he said. "The diplomatic sequel to that will now begin
Click to expand...

So we admittedly didn't get out everyone that we wanted to get out but we let the Taliban dictate the terms.

Simple question for @D'Snowth. HOW is it OK to leave U.S. citizens behind?

Four thousand troops died in Afghanistan over the last 20 years.
If Biden wanted to bring the troops home, fine.
But…
Now let THIS sink in.
You get the American civilians and Afghan allies out first, THEN withdraw the troops.
As of today, all the troops have been withdrawn, but civilians are still stranded.

The Biden administration don’t even know how many are still there. And he won’t field any questions.
Many veterans who served over the last two decades are sick of how this ended.

I’ll even break down how American casualties in Afghanistan are counted
4,005 deaths