Charles Durning (1923-2012): The actor who played Doc Hopper in The Muppet Movie and Santa Claus in Elmo Saves Christmas has died of natural causes on Christmas Eve 2012. He was 89. </3

At least he lived to a ripe old age!

First Jack Klugman, now him. And on the same day. Waaaaah.....

I'm glad I did not have to post this today of all days...sad, but also in a good way we can take to heart that he lived to be a great actor and shared himself with the world. 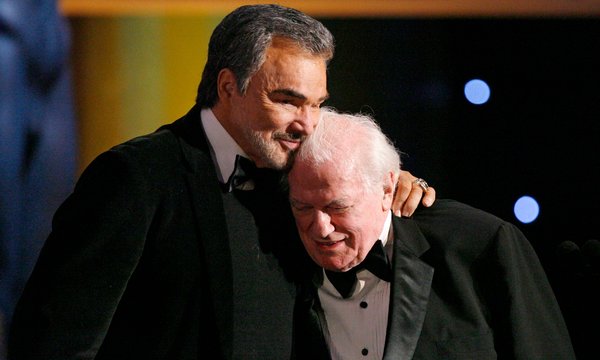 Charles Durning, who overcame poverty, battlefield trauma and nagging self-doubt to become an acclaimed character actor, whether on stage as Big Daddy in “Cat on a Hot Tin Roof” or in film as the lonely widower smitten with a cross-dressing Dustin Hoffman in “Tootsie,” died on Monday at his home in Manhattan. He was 89.

Charles Durning may not have been a household name, but with his pugnacious features and imposing bulk he was a familiar presence in American movies, television and theater, even if often overshadowed by the headliners.

Alongside Paul Newman and Robert Redford’s con men, Mr. Durning was a crooked cop in the 1973 movie “The Sting”; starring with Nick Nolte, he was a dedicated assistant football coach in “North Dallas Forty” (1979); in the shadow of Robert De Niro, he was a hypocritical power broker in “True Confessions” (1981).

If his ordinary-guy looks deprived him of leading-man roles, they did not leave him typecast. He could play gruff and combative or gentle and funny. In the comedy “Tootsie” (1982) he was a little of each, playing Jessica Lange’s unsuspecting father, who falls for a television actor masquerading as a woman.

Not surprisingly, Mr. Durning’s two Oscar nominations were for supporting roles, as a slippery governor in the Burt Reynolds-Dolly Parton musical “The Best Little Whorehouse in Texas” (1982) and as a lustful Nazi colonel in the 1983 remake of “To Be or Not to Be,” starring Mel Brooks and Anne Bancroft.

His television credits were voluminous, from guest spots to substantial parts in TV movies and mini-series. He was a regular on “Evening Shade,” the 1990s sitcom that starred Burt Reynolds, and “First Monday,” a short-lived 2002 drama about the Supreme Court. He had recurring roles as a priest on “Everybody Loves Raymond” and as the ex-firefighter father of Denis Leary’s Tommy in the firehouse series “Rescue Me.” In all, Mr. Durning received nine Emmy Award nominations, although he never won.

His Big Daddy, the bullying, dying plantation owner in a 1990 Broadway revival of Tennessee Williams’s “Cat on a Hot Tin Roof,” brought him a Tony Award for best featured actor in a play. Frank Rich, then the chief drama critic for The New York Times, likened the performance to “a dying volcano, in final, sputtering eruption.”

“Cat” was Mr. Durning’s first Broadway hit since 1972, when he drew praise as a small-town mayor seeking re-election in “That Championship Season,” Jason Miller’s Tony-winning drama about the reunion of a high school basketball team.

He went on to appear in a pair of short-lived 1973 Broadway productions — David Rabe’s “Boom Boom Room” and Hugh Leonard’s “Au Pair Man,” in which he co-starred with Julie Harris — and, three years later, in Jules Feiffer’s comedy “Knock Knock.”

Despite his success, Mr. Durning fought a lifelong battle with himself.

“I lack confidence as an actor,” he told The Toronto Star in 1988. When asked what he thought his image was, he replied: “Image? ****, I don’t have an image.” He later told The Pittsburgh Gazette that he was “driven by fear — the fear of not being recognized by your peers.”

Charles Edward Durning was born into poverty on Feb. 28, 1923, in the Hudson River village of Highland Falls, N.Y., the ninth of 10 children. His father, James, an Irish immigrant, had been sickened by mustard gas and lost a leg in World War I. He died when Charles was 12. Five of Charles’s sisters died of either smallpox or scarlet fever in childhood, three of them within two weeks.

Never a good student, young Charles dropped out of school and fled to Pennsylvania, deciding that his mother, Louise, a laundress at the United States Military Academy at West Point, would fare better with one less mouth to feed. He worked as a farmhand and did other menial jobs before moving to Buffalo, where again he took odd jobs. One, opportunely, was as an usher in a burlesque house.

One night a frequently drunk comedian failed to show up, and Mr. Durning, who had memorized the comic’s jokes, persuaded the manager to let him go on. He “got laughs,” he later recalled, and was “hooked” on show business. He made his stage debut in Buffalo.

Then came World War II, and he enlisted in the Army. His combat experiences were harrowing. He was in the first wave of troops to land on Omaha Beach on D-Day and his unit’s lone survivor of a machine-gun ambush. In Belgium he was stabbed in hand-to-hand combat with a German soldier, whom he bludgeoned to death with a rock. Fighting in the Battle of the Bulge, he and the rest of his company were captured and forced to march through a pine forest at Malmedy, the scene of an infamous massacre in which the Germans opened fire on almost 90 prisoners. Mr. Durning was among the few to escape.

By the war’s end he had been awarded a Silver Star for valor and three Purple Hearts, having suffered gunshot and shrapnel wounds as well. He spent months in hospitals and was treated for psychological trauma.

After the war, still mentally troubled, Mr. Durning “dropped into a void for almost a decade” before deciding to study acting at the American Academy of Dramatic Arts in New York, he told Parade magazine in 1993. The school dismissed him within a year. “They basically said you have no talent and you couldn’t even buy a dime’s worth of it if it was for sale,” he told The Times in 1997.

He went from job to job, from doorman to dishwasher to cabdriver. He boxed professionally for a time, delivered telegrams and taught ballroom dancing, meeting his first wife, Carol, at an Arthur Murray studio. Every so often he landed a bit part in a play.

His big break came in 1962, when Joseph Papp, founder of the Public Theater and the New York Shakespeare Festival, invited him to audition. It was the start of a long association with Papp, who cast him, often as a clown, in 35 plays, many by Shakespeare.

Mr. Durning preferred the stage to movies, finding roles in Dennis J. Reardon’s “Happiness Cage,” “The World of Günter Grass” and Ernest Thompson’s “On Golden Pond,” among other plays.

His work in “That Championship Season,” first produced at the Public Theater, led the film director George Roy Hill to tap Mr. Durning for the part of a corrupt police lieutenant in “The Sting.” Two years later he played a beleaguered police hostage negotiator squaring off against Al Pacino’s manic bank robber in Sidney Lumet’s celebrated “Dog Day Afternoon.”

The 1970s and ’80s were fruitful years. Mr. Durning received Emmy nominations for supporting performances in the mini-series “Captains and the Kings” (1976), the prison drama “Attica” (1980) and a CBS production of Arthur Miller’s “Death of a Salesman” (1985), in which he played Charley, the sympathetic neighbor of Willy Loman (Dustin Hoffman). He was also nominated for his starring performance as a mailman romancing a lonely widow (Maureen Stapleton) in the 1975 CBS television movie “Queen of the Stardust Ballroom.”

In 1977 he played an American president held hostage by rogue military men in Robert Aldrich’s film “Twilight’s Last Gleaming.” His many other film roles include Chief Brandon in Warren Beatty’s colorful “Dick Tracy” (1990), Holly Hunter’s kindhearted father in “Home for the Holidays” (1995) and, in a pair of Coen brothers films, a suicidal industrialist in “The Hudsucker Proxy” (1994) and a gruff Southern governor in “O Brother, Where Art Thou?” (2000).

He tried to perform in at least one play a year. In 1996 he fought a courtroom duel with George C. Scott in the Broadway revival of “Inherit the Wind,” the drama by Jerome Lawrence and Robert E. Lee based on the Scopes “monkey trial” of 1925. Mr. Durning played the prosecutor, a character based on William Jennings Bryan, and Scott, in his last Broadway role, was the defense attorney, modeled on Clarence Darrow.

The next year Mr. Durning co-starred with Julie Harris in a Broadway revival of “The Gin Game,” D. L. Coburn’s Pulitzer-winning play about two nursing home residents whose game of cards becomes a clash of wills. In 2000, in the retitled revival called “Gore Vidal’s ‘The Best Man,’ ” he played an ailing former president who tries to mediate a power struggle between two candidates. In 2002 he appeared with Mr. Pacino in an Off Broadway production of Bertolt Brecht’s “Resistible Rise of Arturo Ui.” At Lincoln Center in 2005, he was the senile father of a college professor (Dianne Wiest) in Wendy Wasserstein’s “Third.”

He continued to act almost until his death. “Scavenger Killers,” a crime thriller in which he stars with Eric Roberts and Robert Loggia, is scheduled to open next year.

Mr. Durning’s first marriage, to Carole Doughty, ended in divorce; he was separated from his second wife, Mary Ann Amelio. Besides his daughter Michele, he is survived by another daughter, Jeanine Durning, and a son, Douglas.

In 2008 the Screen Actors Guild gave Mr. Durning its Life Achievement Award, as if to dispel any lingering doubts he had about being recognized by his peers. And in 2007 the American Academy of Dramatic Arts, the school that he said had long ago rejected him, created a scholarship in honor of him and two other alumni, Anne Bancroft and Gena Rowlands.

Mr. Durning was also remembered for his combat service, which he avoided discussing publicly until later in life. He spoke at memorial ceremonies in Washington, and in 2008 France awarded him the National Order of the Legion of Honor.

In the Parade interview, he recalled the hand-to-hand combat. “I was crossing a field somewhere in Belgium,” he said. “A German soldier ran toward me carrying a bayonet. He couldn’t have been more than 14 or 15. I didn’t see a soldier. I saw a boy. Even though he was coming at me, I couldn’t shoot.”

They grappled, he recounted later — he was stabbed seven or eight times — until finally he grasped a rock and made it a weapon. After killing the youth, he said, he held him in his arms and wept.

Mr. Durning said the memories never left him, even when performing, even when he became, however briefly, someone else.

“There are many secrets in us, in the depths of our souls, that we don’t want anyone to know about,” he told Parade. “There’s terror and repulsion in us, the terrible spot that we don’t talk about. That place that no one knows about — horrifying things we keep secret. A lot of that is released through acting.”

R.I.P Charles Durning a.k.a Doc Hopper
At least he had a good, long life.