It's time for us fans to put our foot...errr... feet down. Far too long have we been polite about this: 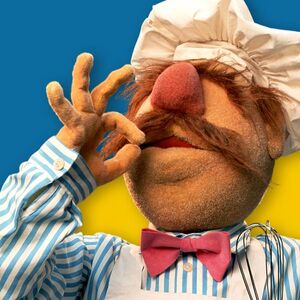 It's time to take this horse to the back of the barn. Face it. It's the single most overused stock Muppet poser photo out there. Even more so than the lame folded arms wearing glasses and chili pepper wearing Gonzo that were done well over 20 years ago. This thing is on at least 2 different die cast cars by 2 different companies over 10 years apart. Now's the time for the Chef to stop saying "It's Perfetto" (or alternatively smoking an imaginary joint or imitating Snidley Whiplash) and to get a whole new Chef poser photo out there to run into the ground over the course of the next 20 years.

All franchises have this problem of using the exact same stock shots of characters to use for posters, banners, promotional items, etc... it's pure laziness, that's all it is.

This is my least favorite Muppet stock photo that exists, more so than any others, simply because to start with, it's strange. After years of analyzing it, I finally get that he's sorta kissing his fingers type thing, but it half looks like he's smoking or something. It's just a strange pose altogether for the chef when a much nicer stock photo would be having him holding a rolling pin or something.

And then we come to the overusing aspects. This thing is on everything! When are we going to get another Swedish Chef stock photo which is at least a little bit better?

I'm just curious, does anyone know exactly where this photo first appeared and/or when it is from?

If the Swedish Chef "Okee-dokee" hand gesture were to be a few inches higher near his nose, people would probably start turning it into some Internet gag meme photo about how it looked like he was taking a pinch of snuff....

This photo has unfortunately caused some other people out there on the Web to create another twisted Internet meme:

That's the thing...if the chef was doing anything BUT what he is, I wouldn't hate this picture so much. It's just that the entire gesture is just weird...

He's just doing something that a lot of chefs (and French people, ironically) do whenever they express satisfaction with a meal they just perfected... though, usually, they tend to use all four fingers.
You must log in or register to reply here.
Share:
Facebook Twitter Reddit Pinterest Tumblr WhatsApp Email Link
Top