So after completing my mini Fozzie I was trying to think of a new project. At first I was considering a Sheesh Kermit for whom I have a completed head sculpt, but since Fozzie was in a distraught positions I thought another "unhappy" figure seemed too... unhappy. Soo... I switched gears and sketched out a Santa Chef with a bag full of singing food. The idea was to make this an ornament like the Hallmark Muppet line. 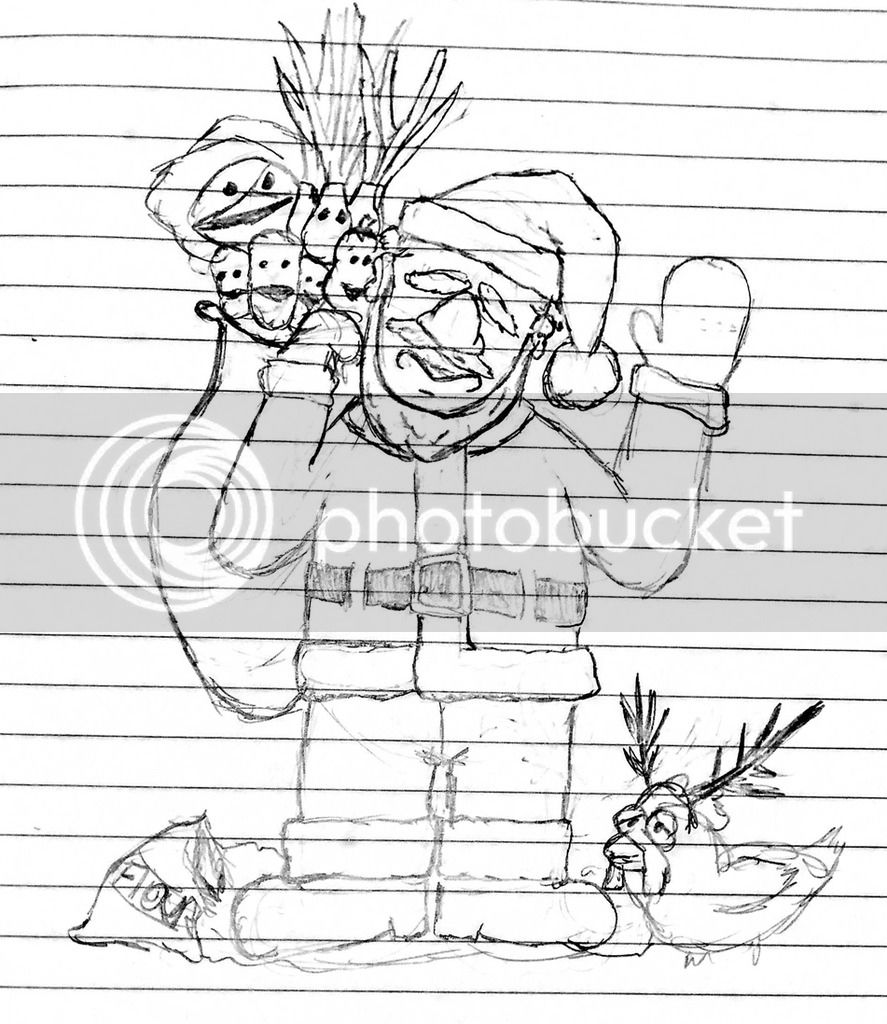 I decided to start in clay this time, where as with Fozzie I started in wax. Wax holds detail, but is REALLY slow to work with and you basically need to commit to a pose from the start as you can't really adjust as you go. So, I roughed out the shapes in clay first and then made a mold of the rough shape and then cast a copy in wax. 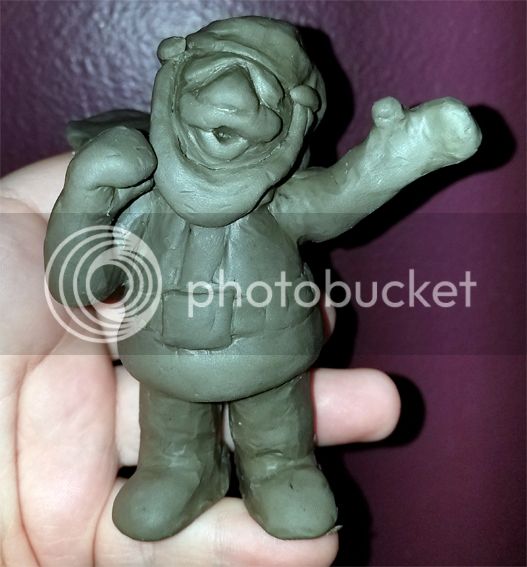 Once cast in wax I started carving out the details on the rough shape. Made some of the features smaller, trimmed the beard, added fur cuffs, added texture, etc. It changed considerably.

The wax looks like milk chocolate and when melted it looks like a rich hot coco.... do not eat it though....

This is basically the final sculpt of the Chef himself. I liked the idea that its just the Chef with a fake beard so I tried keeping that look from the old Palisades toy. Not pictures yet are the Muppet food that will fill his bag. I am doing those separate so that I can also use them with the new DST Chef figure. They will be glued onto the bag. He will also have a base of "snow" along with an open bag of flour which spilled to simulate snow and possibly a reindeer chicken.

At the moment I am waiting on some new paints, specifically a flesh tone for his face and gold for his buckle. I will post more pictures once I have finished the base and veggies and cast a test shot in gray resin. Once finished (hopefully this week) I will put him up for sale for anyone that wants one. If I finish this week I can get them delivered by Christmas. Otherwise... there is always next year.

More or less the complete scene. Snow on the ground, reindeer chicken (subject to change), bag of flour (which is where the "snow" came from), and smaller scale Muppet veggies redone. more will be on the back (not pictured) 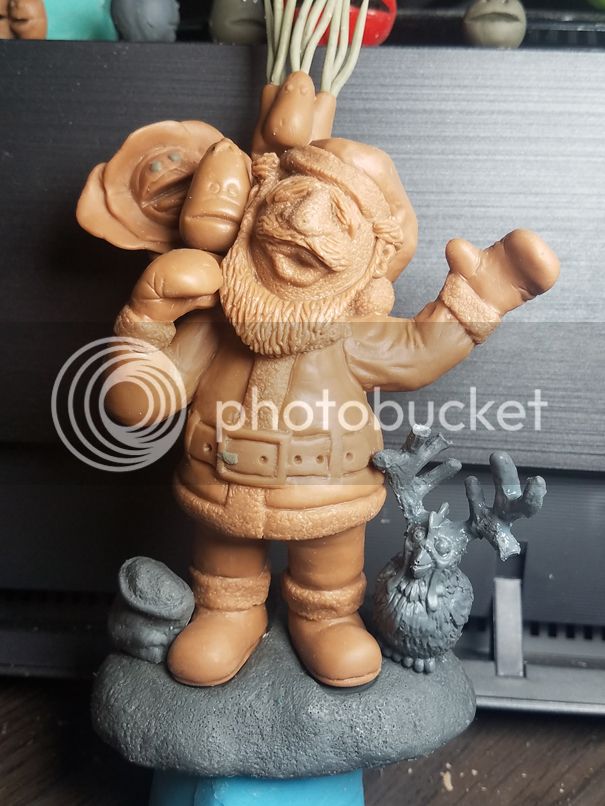 In order to get an idea of what the final will look like, I did a quick and messy digital coloring. 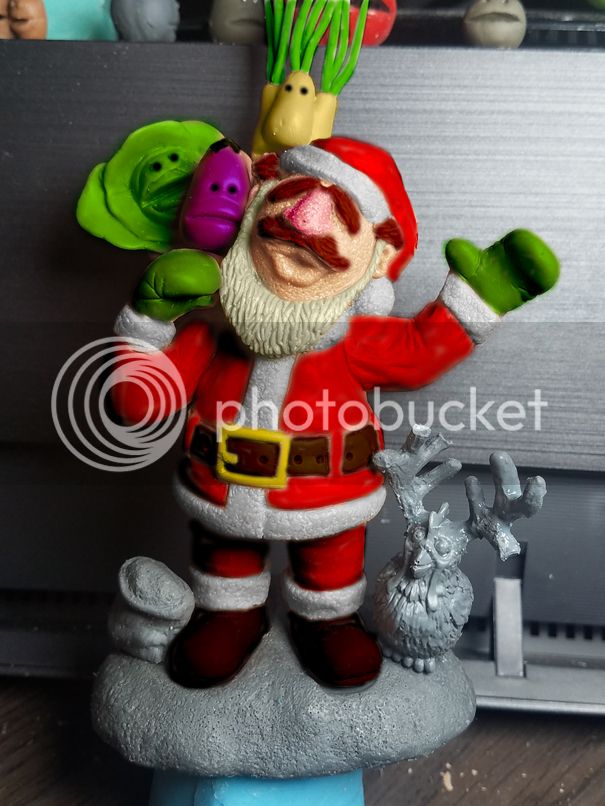 Should have actual painted samples by the end of the weekend.

Well, roughly 2 weeks after I started here is the final painted sample. 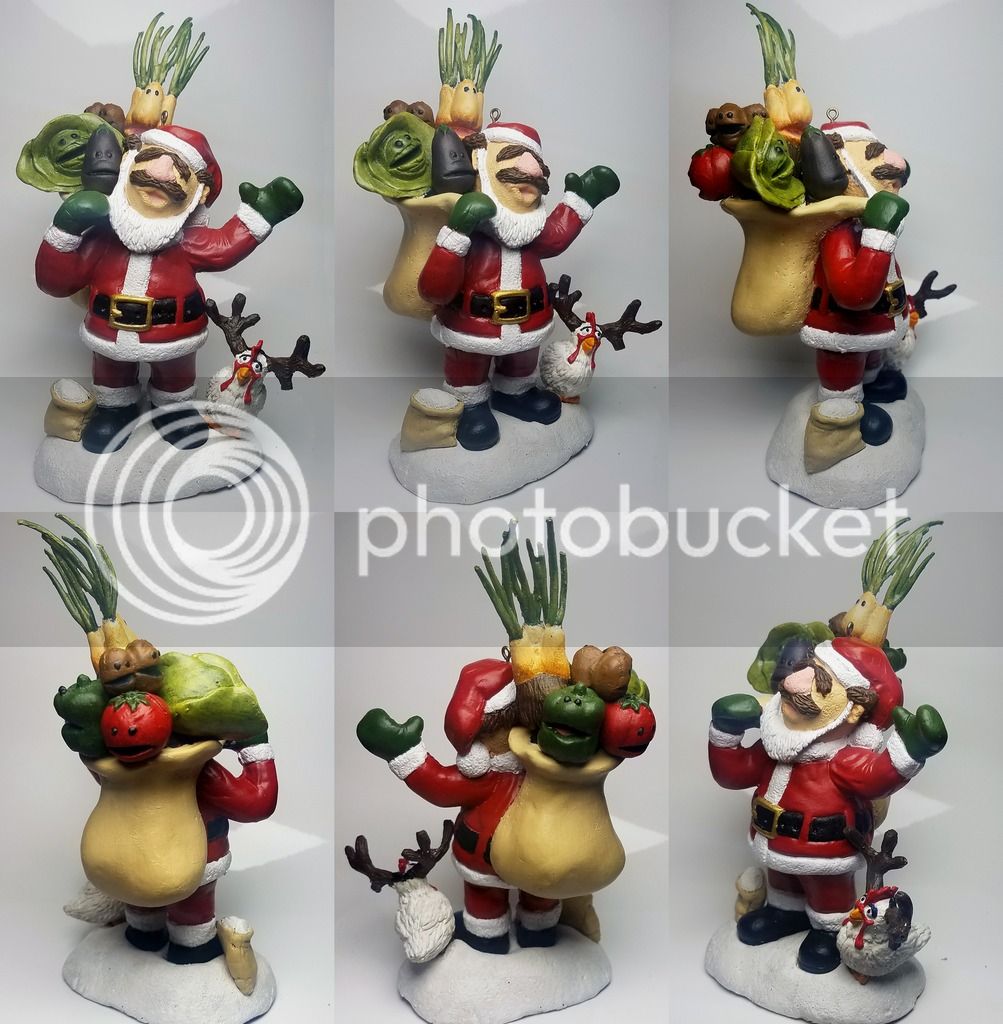 Each veggie is a separate mold so I can cast more and use them with my DST Chef (If he were gets here...). The chicken antlers were the hardest part, kept trapping air and or coming off in the mold.

Everything is 100% hand painted, all by brush, no air brushing things time. I intentionally did a splotchy paint job on the veggies to try to give a foam texture look. I think it gives them more character.

Hope you all like it. I will make it available on my Etsy shop, though due to the complexity I will not be able to get any out before Christmas as I had hoped. This is the first and only finished piece and I will make more to order if they are requested.

Chef is now listed for anyone interested. I've listed it at $40 due to the overall complexity.

Any funds will go right back into helping me create more figures. Thanks again to anyone viewing and I hope anyone who makes a purchase enjoys the figure as much as I enjoyed making it.

Thank you very much. I must say, I do like this one a lot with all the colors going on. Also it was nostalgic re-sculpting the cabbage, eggplant, and scallions. I kinda like the newer smaller ones better than the ones I did for Palisades.... especially the scallions.
You must log in or register to reply here.
Share:
Facebook Twitter Reddit Pinterest Tumblr WhatsApp Email Link
Top