For the past two years, my Palisades Muppet Collection was sitting in their boxes down in my parents' basement. My wife and I started the process of clearing out all of my stuff at their house, and I decided to take them out and display them! It also helped that my parents let me have the old bookshelf that I used to display them on back in High School. After setting them up, as well as several rearrangements, I've finally finished my display! There are several pictures to capture it, so I'll do one post for every shelf


Starting with the Backstage Playset. Originally, I was going to put Kermit behind the desk, but I didn't like how little of Kermit, you could see, so I went with Beauregard in that area since he's tall enough that he's not really hidden. Scooter yelling down from the megaphone seemed like an obvious choice. I've also got Crazy Harry causing trouble as usual up there. Gonzo is borrowing Scooter's skateboard, but I wanted something interesting for Gonzo, and I think it looks like he's about to do a crazy stunt or something. Finally, at the bottom of the stairs is Rowlf. Admittedly he's not doing much, but there's not really much to do since his hands are designed for the piano instead of holding things.

As you can see, I've also scattered various props from several characters throughout the set as well. I used some tape to help a few of them that kept falling. With all of the pegs they have, if you don't have at least a few things on the walls, I think it looks awkward. You'll also notice that I put one of Statler and Waldorf's score cards on each of the playsets. At some point during storage and moving, the phonograph broke, so I have the base by Scooter and the speak above Crazy Harry 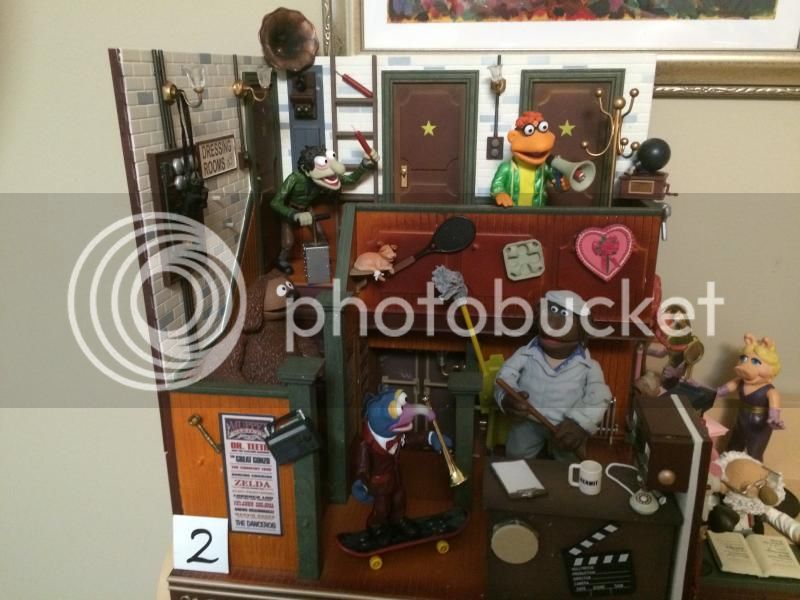 Directly adjacent to Backstage is Pops complete with his Hotel table as well as Miss Piggy making sure she looks lovely for the camera that just happens to be facing her. Then at the area that would be the front of the stage is one of the great Muppet duos, Kermit and Fozzie! The microphone stand broke, so I have Kermit holding the microphone. I'd like to think he's about to introduce Fozzie's comedy act with his rubber chicken and funny nose glasses 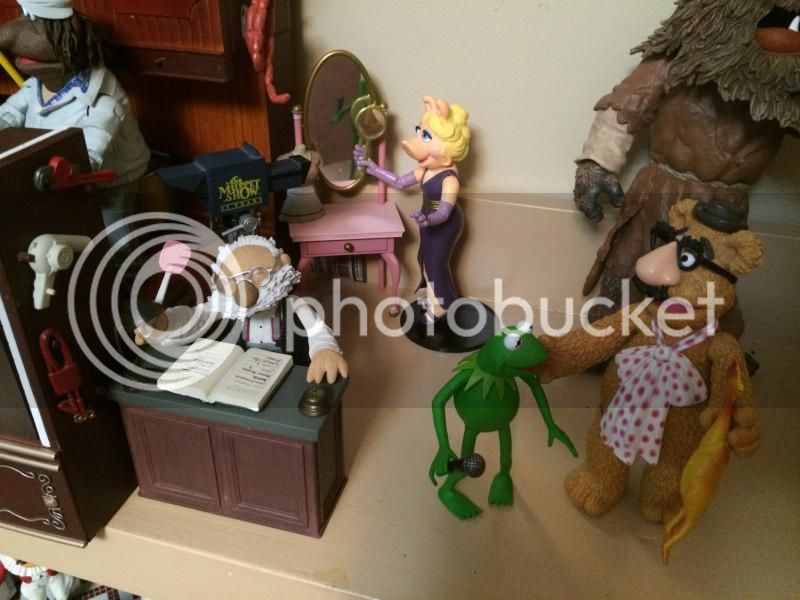 Another classic duo, Sweetums and Robin. Originally I had them on a lower shelf, but with Sweetums height, you couldn't see him very well that way unless you bent down, so I moved 'em up. It was a little tricky positioning it so that Sweetums can be holding Robin and somewhat looking at each other, but I think it turned out nicely 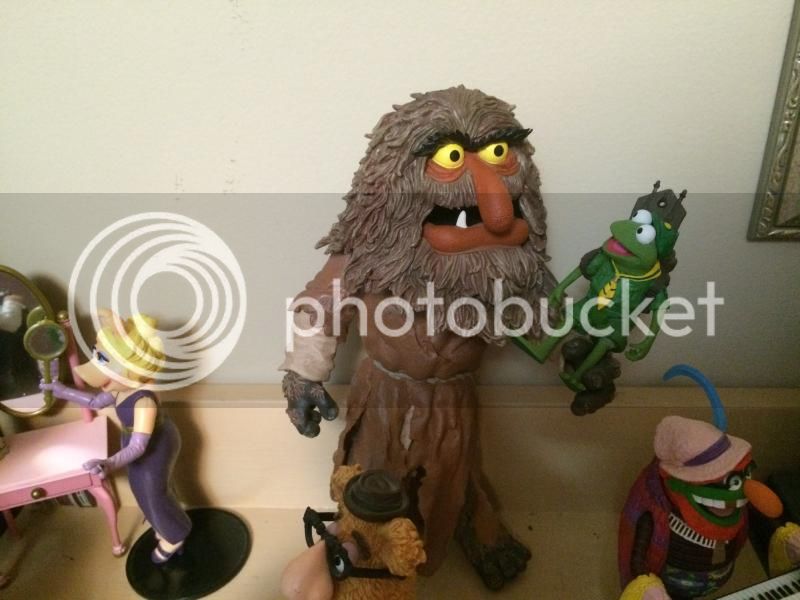 Completing shelf 1 is The Electric Mayhem! Complete with Animal, Dr. Teeth, Floyd, Janice, Zoot, and Lips. You might notice that I have the variant versions of Floyd and Lips instead of the regular, which is fine with me. One thing I was a little bummed about is that at some point, Floyd's hat decided to go MIA. I ended up having to super glue Janice's left leg back on, so she has very limited balance and mobility, which is why she's on a stand (I also had to glue Lips' trumpet together, which worked very well). Something else interesting that I realized way back when I originally got my Lips figure is that he came with 2 album covers! I have them displayed on the speakers. 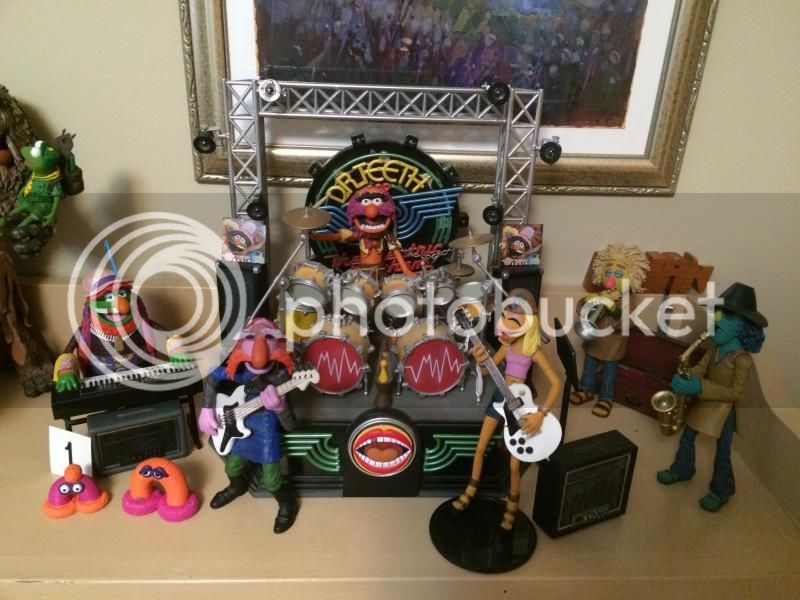 Starting the Second Shelf is the Swedish Chef with his Kitchen. Joining him in the kitchen is Lew Zealand, and an unwilling Camilla and Polly Lobster. It turns out they fit perfectly into the brown pots. You can't see it from this angle, but I also have one of Lew's fish in the mixer behind the Chef. I also thought this set would be perfect for the talking vegetables from Statler and Waldorf (although I'm missing the carrot) 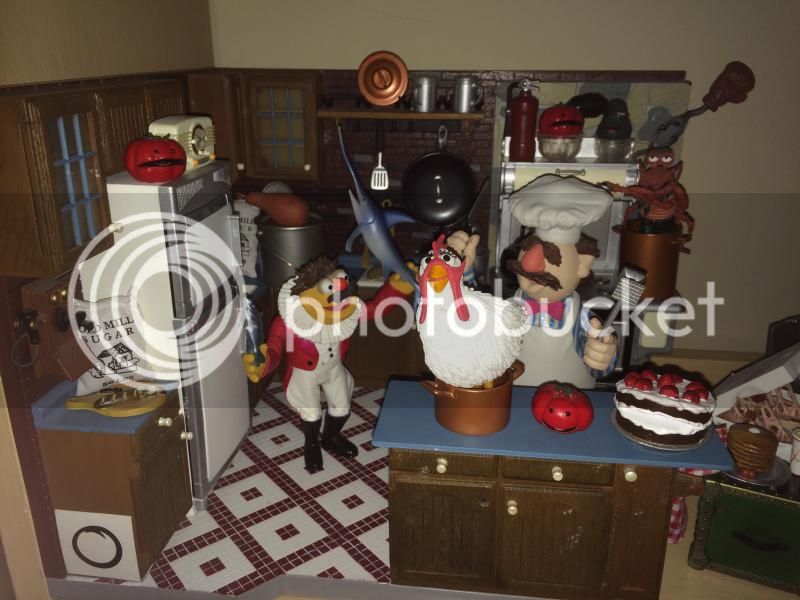 This is one of my favorite settings. Since I paired up Robin with Sweetums, I decided to improvise and mix Robin's accessories with Rizzo and Pepe and design a perfect campout for our favorite Rat and Prawn...one with TONS of food! I've borrowed almost all the food accessories that came with various figures and set it all up. The trail mix bag and soda fit nicely into one of the lunch boxes. and the "poison" straw fits into Pepe's hand peg-hold and then it looks like he's holding it with his bottom hand. Robin's marshmallow stick also fits nicely into Rizzo's hand as well. I had a lot of fun putting this one together. 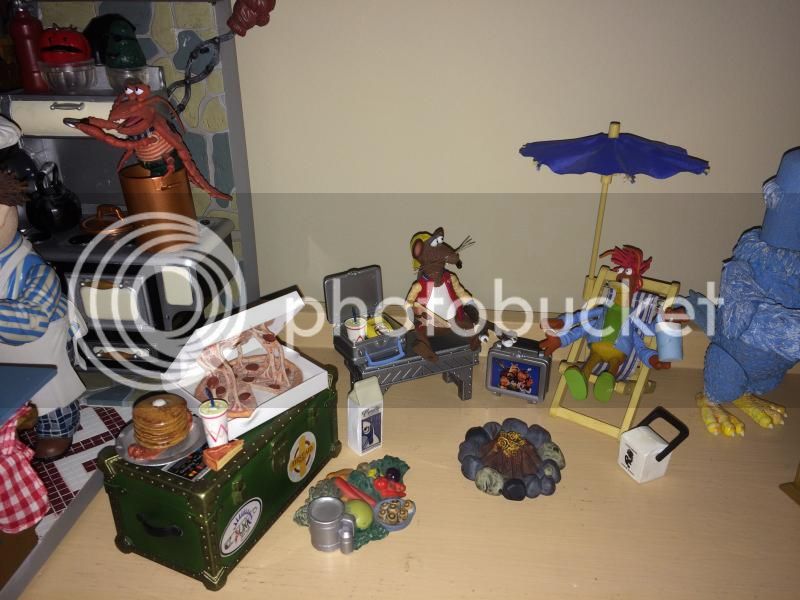 Here we have Sam the Eagle and the Newsman. The only change from their original accessories here is the addition of Clifford's microphone. I feel like these two work well together. I imagine their having some kind if spirited debate that's just about to get interrupted by some Muppety disaster...maybe from Muppet Labs right next to them. 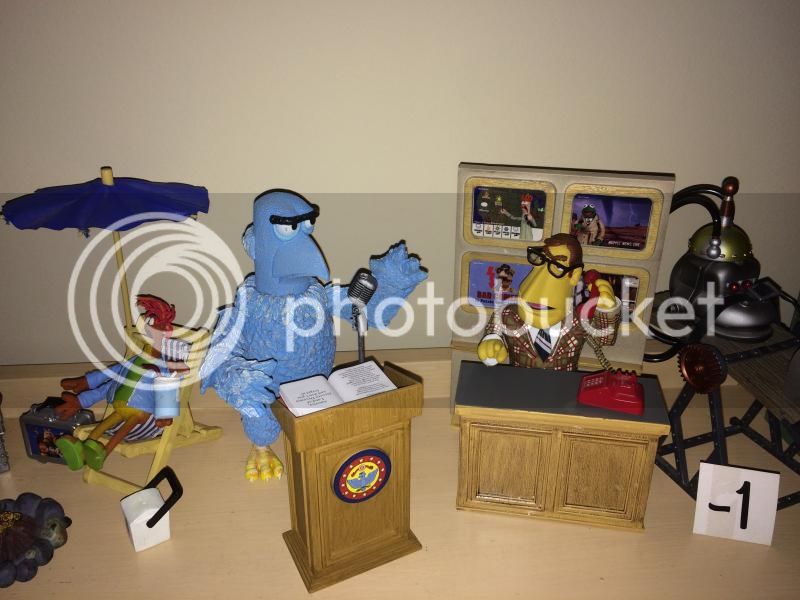 Finishing Second Shelf is Muppet Labs, with Bunsen, Beaker, and Dr. Phil. Here we have some kind of wacky experiment going on. Bunsen seems to be reading instructions as Beaker mixes some test tubes together, while Dr. Phil's working one of the movable Levers. I also wanted to make some use out of the Muppet Labs accessories so I'm using the Experimentation Table for the Robot Rabbit and Gorilla detector (with the help of Crazy Harry's Gun Powder barrel for support) 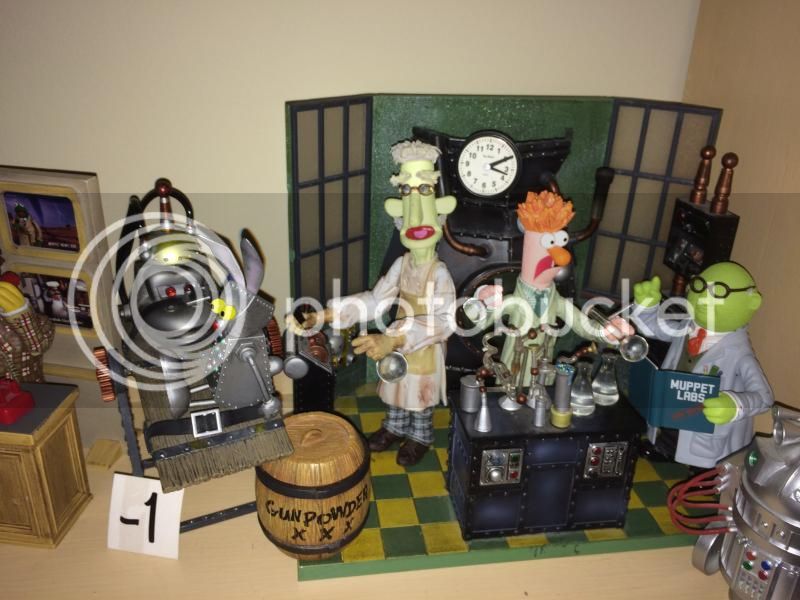 Starting the Third Shelf is Piiiiiiigs Iiiiiiin Spaaaaace! with Link Hogthrob, First Mate Piggy, and Dr. Strangepork. Every few days I'll rotate in a new background. Today's selection is Beaker! This one is pretty self explanatory. I've got the Swine Trek model and Starhog magazine on display. Dr. Strangepork's also armed with his ray-gun (sorry I forgot the official name for it) 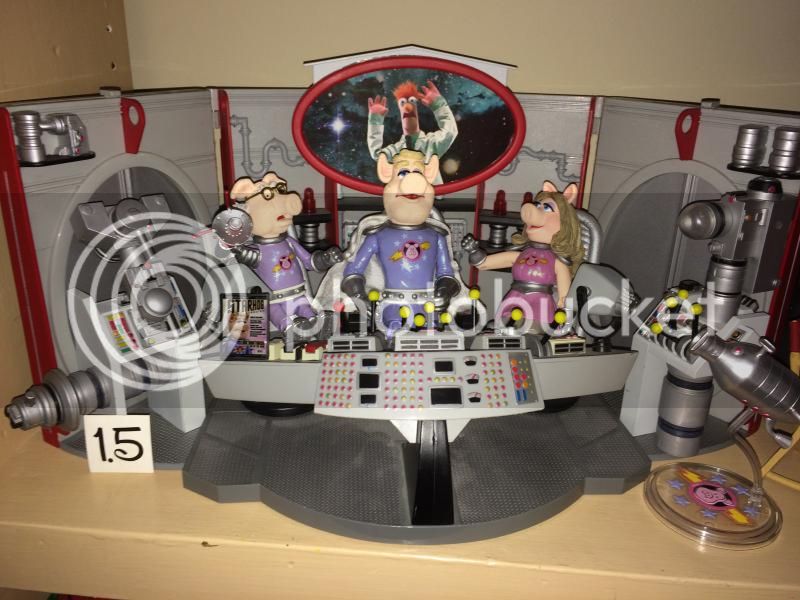 Next is an interesting mix of characters. Going left to right is Clifford, sitting in his director's chair holding his phone, supervising the act that's going on. We have Tux Rowlf accompanying Johnny Fiamma who's singing his heart out. Also joining in is, Marvin Suggs and his Muppaphone. Why? well I didn't know where else to put it, but also..why not! 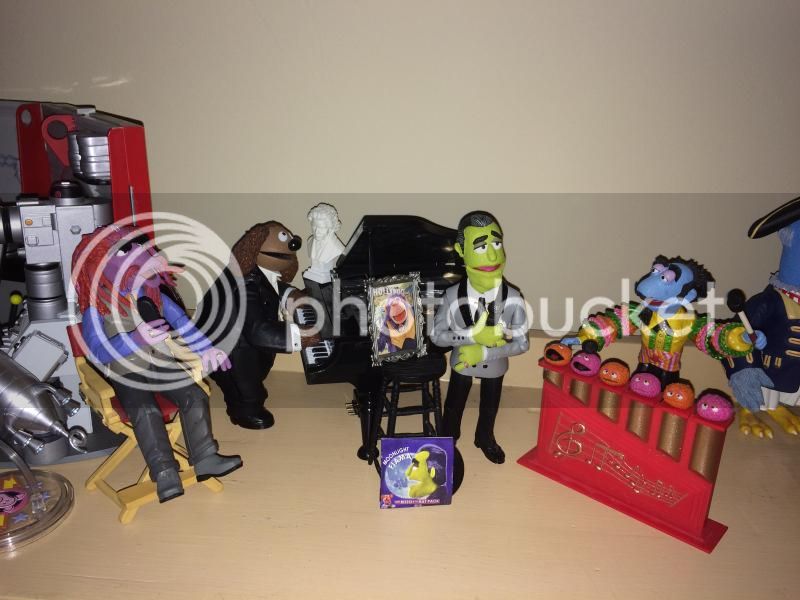 Completing Shelf Three is a couple cast members from Muppet Treasure Island, Captain Smollet and Samuel Arrow. On the far end is Daredevil Gonzo about to do a stunt, unless he's stopped by Patrol Bear! 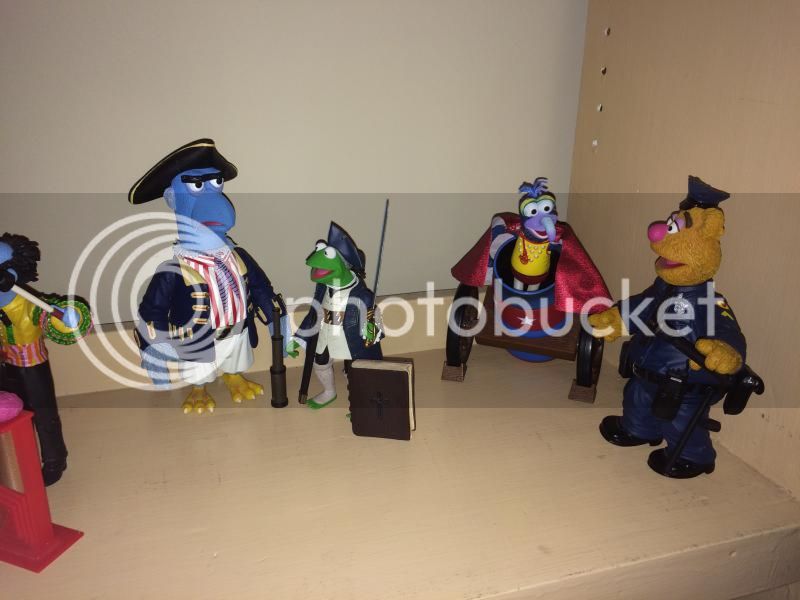 Now comes one of my absolute favorite displays, Staler and Waldorf. What makes this so great is the balcony. For those of you, wondering where I got it, my late-grandfather made this shelf back in the 80s or 90s. He was an expert at woodworking and could make just about everything in his workshop. I'm pretty sure all of us in the family have something he made in our house. I also love all the detailing he did, truly amazing.

I remember back in High School, when I first got these figures, I found this shelf in my parents' laundry room and thought it would be perfect for Statler and Waldorf. When I was living at home, I actually had it mounted up on the wall for the full effect. I may eventually do that again, but for now this will do. 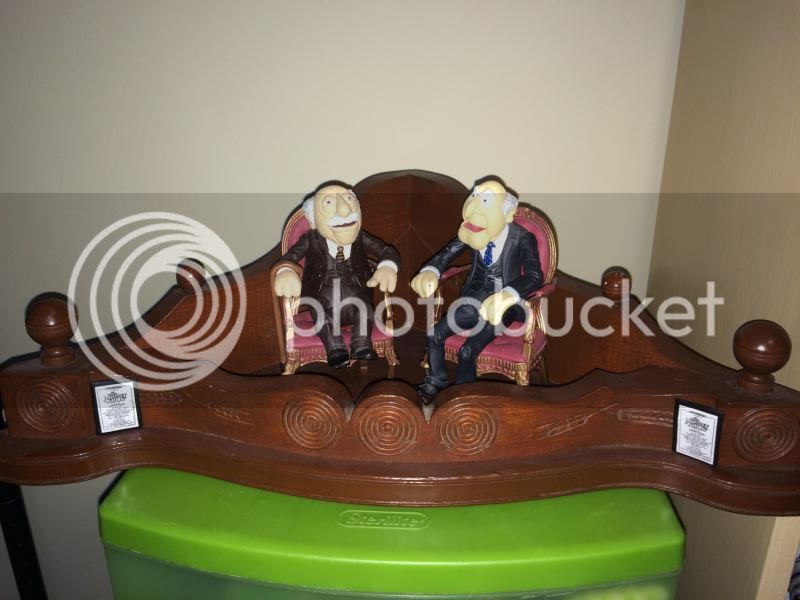 Here's the full view of my collection. I'd like to add Uncle Deadly, Cabin Boy Gonzo and Rizzo, and Usher Scooter to the mix, but for now, I really like what I have. 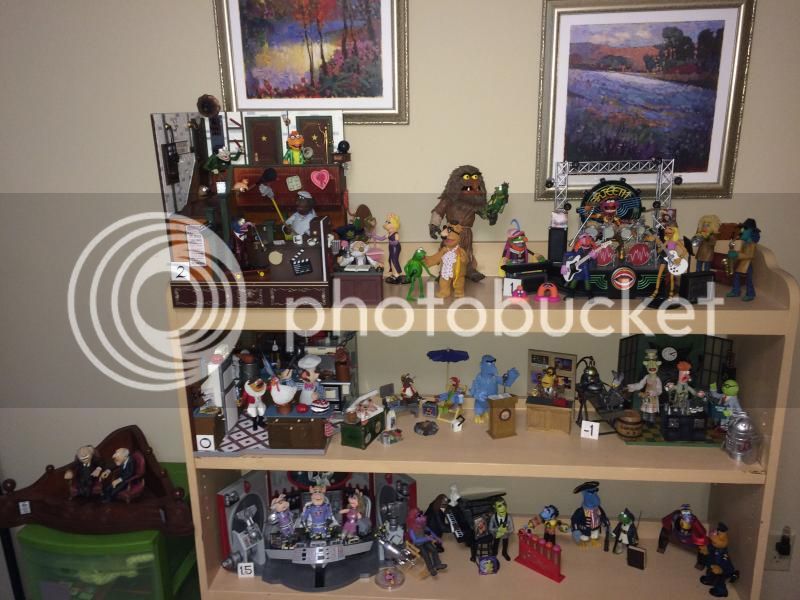 What do you guys like/dislike? Any suggestions for poses?

Love it! Great collection. Love the campfire setting you've got, although I'd be very torn between having Robin with Sweetums or having him toasting his marshmallows over the fire!

Thanks! yeah it's difficult, because there are so many ways to display them. I might go back and switch up the display every so often as well.

Okay I'm unbelievably jealous. This collection is amazing! I love pallisade characters as they are so detailed (and kind of fun to play with not going to lie). I'd try to fit Statler and Waldorf in the group a little better though. But really good job arranging the playsets

Thanks! yeah the plan is to eventually hang the balcony shelf up so that Statler and Waldorf are looking down at the rest of them, but my wife and I might be moving this Spring, so I'll probably just wait with that for now.

Yeah, arranging the playsets was the best part!

Very nice. I may have to rearrange my collection now. Jealous.