How would anyone feel about a Sesame Street and My Little Pony: Friendship is Magic Crossover?

Given that some of their toys are devleoped at the Hasbro company and the vast popularity rising of the current incarnation of the My Little Pony franchise...I was wondering how would anyone feel if the Sesame Street gang meet the ponies of Equestria in a prime-time special ?

One of the reasons I'm asking this is to just see some actual cartoon characters guest star on Sesame Street again and seeing the Popularity of the MLP: FIM rises it would be interesting to see.

Yet another reason I'm doing this concerns a certain background character called Derpy Hooves with her cross eyes look.

This is her picture...

Her popularity rise from the background into an actual Speaking role on the show generated some mild controversy over the character and her actions. Which force Hasbro to "alter" her first speaking appearance on the show into a generate brand of speaking.

Now that angered me to no end as I knew only a few other characters that could react like that an no one raised a hand on them.

So I knew only ONE PERSON in the whole world that could help out in a situation like this... 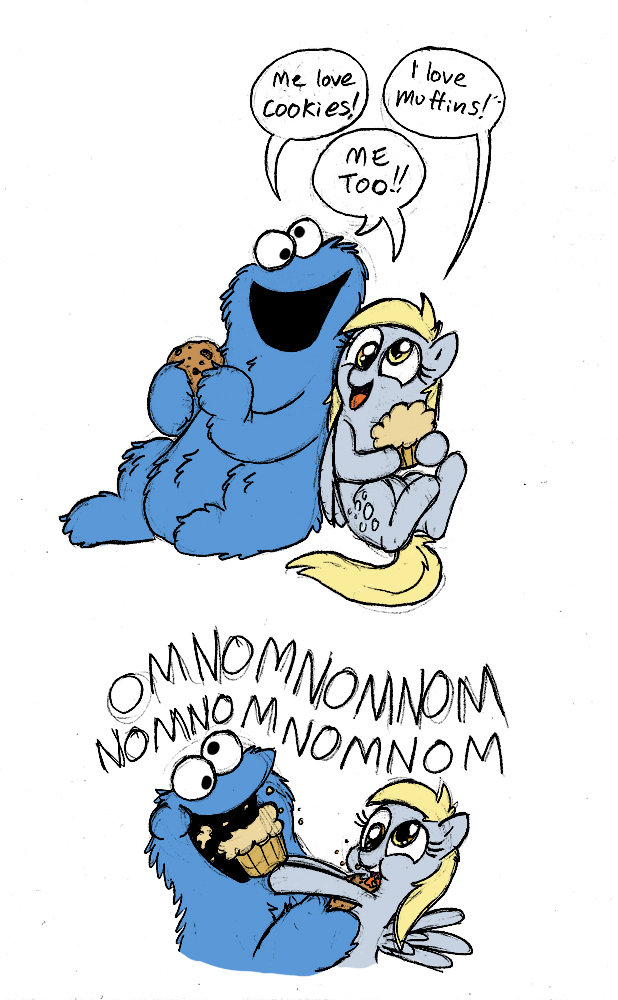 I mean if both shows developers can see this and use it in a positive message, then surely the Derpy Hooves character would be accepted amongst the masses.

Plus it would be fun to see some Pony-ifed versions of Sesame Street songs, wouldn't you agree ?

Anyhow what do you all think of an idea like this...I mean is it a good idea worth watching and working on or not ?

is going to Comic Con this year along side the ponies, it makes you wonder if this idea could someday be a reality...at least while the shows are on the air and in the public's eye.

Yuch! That would be a horrible episode!

Muppet fan 123 said:
Yuch! That would be a horrible episode!
Click to expand...

Honestly, even it was a bit of a 2-3 minute animated short made by the producers of the show ?

I don't remember posting that post that I posted above (Try saying that ten times fast..)
But I still don't this would work. If the Muppets were to go onto MLP, that would be a great episode for them, it would improve the show for them by having Muppets on there... I think if MLP would go on Sesame...that would not be a good be one of their good episodes...

As a lifelong fan of My Little Pony since the 80's you would think I would be all for it. But considering that the 'huge' fandom of FIM is mostly much older than the focus of Sesame Street, I would have to say no.
Don't get me wrong, I like the FIM show, and the little children and lighter older fans of the series are great, but it has a dark side I'm sure the makers of Sesame Street might think twice about getting entangled with. Again, most fans are fine, but I'm not sure FIM is quite the meme with children it is with collage age students, even if it was first made for little girls and boys.
D


Redsonga said:
As a lifelong fan of My Little Pony since the 80's you would think I would be all for it. But considering that the 'huge' fandom of FIM is mostly much older than the focus of Sesame Street, I would have to say no.
Click to expand...

Sigh... remember when Pink Panther, Jughead Jones, Batman and Superman had appearances on the show? Even a pre-Nickelodeon Hey Arnold? Heck... The Simpsons in the Monster in the Mirror son. That's a VERY unlikely appearance, even in the earlier episodes.

Man... I wish some cartoon studio would license their characters out for a small Sesame Street segment. Though Spongebob would be much more likely than MLP FIM. And there's NO way Viacom and SW would get along and let that happen.

What if the voice actresses and actors from My little Pony: Friendship is Magic showed up on Sesame Street.

It would be as close as a crossover between the two properties as we may be getting and it wouldn't go over Hasbro's head in including the animated characters on the show.

So what do you all say to that ?