I also like Sky Commanders, the Centurions (even though it was a RS show at first, it's now owned by HB), the Plastic Man show (another RS show that was acquired by HB), and the Three Musketeers.

I'd like to ask a question regarding a Hanna-Barbera cartoon series, "Captain Caveman and the Teen Angels":

Does anybody have any idea on how old each of the Teen Angels - Taffy Dare, Dee Dee Skyes and Brenda Chance - are in the late 1970s series? I do know they were inspired by "Charlie's Angels" (as Taffy was modeled after Farrah Fawcett).

Also, how old is April Stewart in "The Funky Phantom"?

I also realized a trend regarding Hanna-Barbera cartoons during the 1980s. It turns out that H-B was a huge success before the 1970s. Well, it turns out that there were fewer new H-B cartoons during the 1980s, and many were either Scooby-Doo clones (same format, but with different characters), and series based on prime-time programs and real life comedy series, comic books, video games, toys, and other merchandise. The only original series I can think of that got released in the 1980s were "Foofur" and "The Biskitts", but I am not sure if there are any other original H-B series that decade. Many of the newer H-B series that decade lasted two seasons max. The only H-B series that launched in the 1980s and ran for more than two seasons were "Richie Rich" and "Smurfs".

Here are some of the H-B programs with new content during the 1982-83 season:

Ten different H-B series airing in 1982-83. Plus keep in mind, that there was an animators' strike in 1982, so that could explain the repeats of "Speed Buggy" and "Superfriends" on CBS and ABC that season respectively.

It turns out that the total time for Hanna-Barbera content was reduced that season, possibly to give exposure to cartoons produced by other production companies, such as DiC and Ruby-Spears. Plus, there was "The Charlie Brown and Snoopy Show" on CBS that season too. It is also the season that Ruby-Spears gained momentum on Saturday mornings, and this was also the season that the foreign company, DiC, was starting to evolve, possibly a cost-cutting measure in the wake of the animators' strike of 1982.

The issue in the animators' strike was outsourcing animation work to foreign studios. It lasted ten weeks and was settled early in the fall of 1982. However, Hanna-Barbera's exposure was starting to fade away as the 1980s dragged on, as it was becoming too expensive to produce cartoons in the 1980s, as the Saturday morning cartoon genre was in decline during much of that decade.

As you can see, the total number of Hanna-Barbera programs on a single lineup, during some point in that season was downgraded to just 8 active shows, if you include previously cancelled series airing in reruns. Overall, there were only eight H-B series airing that season in some form, a drop from ten in the previous season. It is also the season in which DiC animations gained exposure, with new series "Wolf Rock TV", "The Get Along Gang" and "Kidd Video". It is pretty clear that H-B was slowly losing steam by that point, and also, two Ruby-Spears productions from 1983 were doing relatively well in the ratings, hence the renewals. One of them would continue production by R-S until 1988.
Last edited: Nov 20, 2020

Also, on a sad note, I found out on Facebook that Ken Spears had passed away recently. Same day as Alex Trebek, only a few months after Ken's partner Joe Ruby passed. 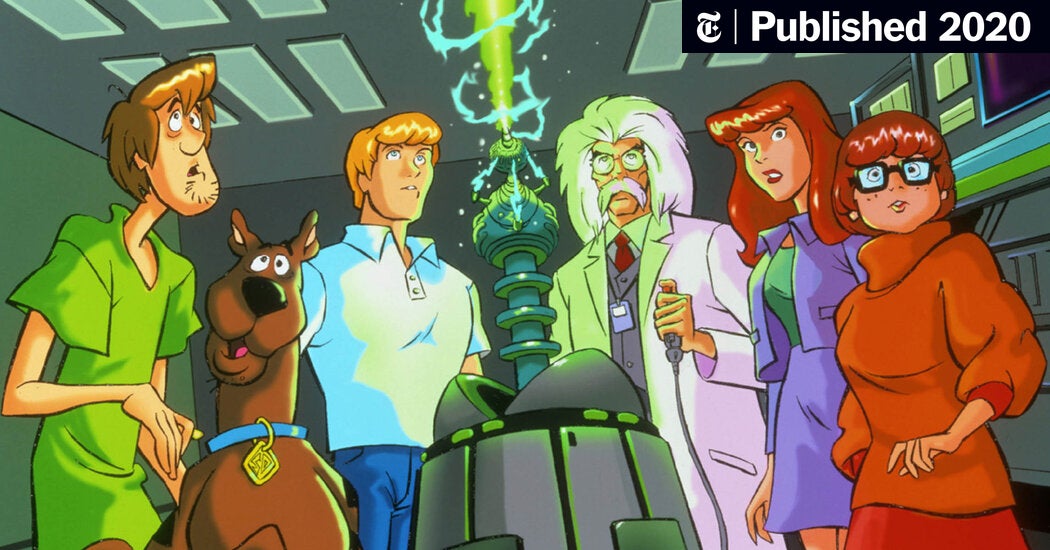 Ken Spears, Partner in an Animation Powerhouse, Dies at 82 (Published 2020)

Mr. Spears and Joe Ruby were best known for “Scooby-Doo, Where Are You!,” perhaps the most spun-off series in the history of television.

Regarding "Benji, Zax, and the Alien Prince", I did find out on Wikipedia that Muppet voice actor Jerry Nelson portrayed a character on one episode in the series. Was he the only Muppet voice actor to work with Hanna-Barbera in some form?

I know some staff that worked for "Sesame Street", such as Cliff Roberts and Jim Simon, did work for Hanna-Barbera in the 1980s.

I mentioned in the ongoing "Arthur" thread that many series tends to rehash past scenes in newer episodes. It seems as if H-B is another example of this. A very prime example is the animated spinoff of "The Little Rascals" which, from the start of the series in 1982, had segments that rehashed events from the black-and-white theatrical shorts. This may explain why the series didn't do well in the ratings (although competition against "Smurfs" may not have helped much) - though it did well enough to get a second season but with a drastically downgraded show and number of new segments.

Many mystery-solving series are viewed as clones of "Scooby-Doo" cartoons. They rehash the Scooby formula, and recycle events from Scooby series, but have different characters and a mascot. Such examples include "The Funky Phantom", "Captain Caveman and the Teen Angels", "Clue Club" and "Josie and the Pussycats". Personally, I like "Captain Caveman and the Teen Angels" the most out of all the Scooby clone series that ever aired.

"Smurfs" tends to be quite abundant in rehashing plots from earlier segments. The show was reduced to one hour in 1988, implying that the writers were running out of ideas. In 1989, they decided that the last new idea was to switch to a time travel format - and the writing was on the wall for the series, as the show was cancelled in 1990, and the Smurfs never got a chance to return to their beloved Smurf village. What a way for the show to go out. For the show to rehash previous plots, that could explain why they added (a) new characterI(s) every season, except for Seasons 4 and 9.

"Pac-Man" had been running low on ideas by the end of the second season, and they added two new characters in the second and final season: the superhero character Super-Pac and the teenager P.J. They were an interesting addition to the show, but the show still bombed because of viewers tuning in to "Smurfs" (and the latter added Baby Smurf to the cast that season).

Benji, Zax, and the Alien Prince scares the heck out of me. Most of Hanna-Barbera's live-action stuff does that. There is no reason for the Banana Splits to have wide-arse grins. (Of course, they were designed by Sid & Marty Krofft, the Makers of Nightmares.)
D

Well, to be fair, Hanna-Barbera did design the characters, the Kroffts just had to adapt the designs into fully-functioning suits, since, obviously an animation character designer wouldn't necessarily understand how that works.

I've noticed for a while now that it seems during the Hanna-Barbera studio's existence (1957-2001), they were fond of doing episodes where the main story, or at least some kind of plot point, involved a main character being impersonated by a villain (usually a villain-of-the-week) disguised as the character full-body (or at least with a mask.) One of the earliest instances was the 1959 Yogi Bear short "Space Bear" when an alien is disguised as Yogi Bear in an attempt to infiltrate and invade Earth (as the only Earthlings they observed were Yogi and Boo-Boo), and they kept it up as late as the 1990 Don Coyote and Sancho Panda episode "Double Don" (hehe, I wouldn't mind having a Don Coyote mask like that!) So I decided to compile many of those instances here together that I could fit in the image. 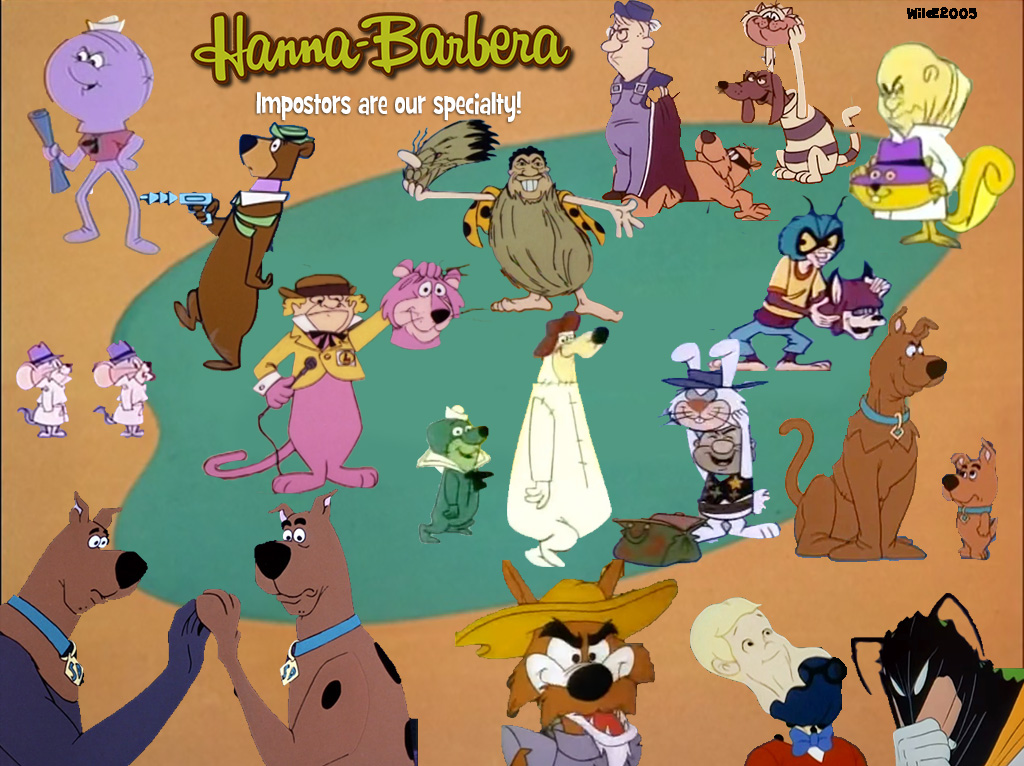 Yes, it was done with Scooby-Doo more than once, and it was done even more outside of the series H-B produced. At least ever since Rubies/Mask Illusions came out with that latex Scooby mask (similar to what the Ape Man used) I can take part in the fun!

Regarding Richie Rich impostors, there were two in the animated series. One was in the Zillion Dollar Adventures segment titled "Villains, Incorporated" during the second season of The Richie Rich/Scooby-Doo Show, where Dr. Disguise impersonated Richie, his girlfriend Gloria, and even Dollar. The other example was in November 1982 during The Pac-Man/Little Rascals/Richie Rich Show, and that episode was a Riches segment titled "Look-Alike" - which would be the last original Riches segment ever broadcast.
You must log in or register to reply here.
Share:
Facebook Twitter Reddit Pinterest Tumblr WhatsApp Email Link
Top