Fraggle Rock Back to the Rock Season 1 Episode 1 - Pilot

To prove he's brave enough to accompany Uncle Matt to Outer Space, Gobo leads the gang on a daring adventure to the Crevice of Solitude. 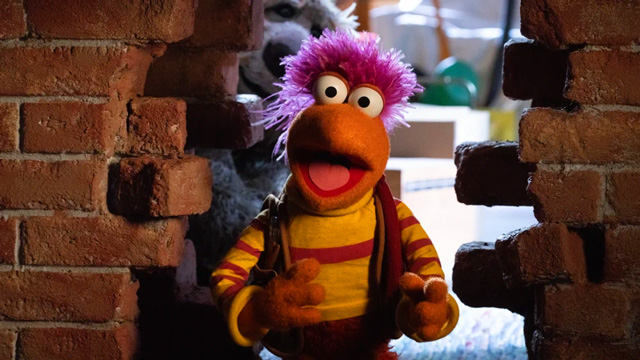 So... in watching the first episode.... this show isn't great, though for kids I am sure it is pretty good. (long post ahead)

As an adult, if I had never seen Fraggle Rock as a kid, I wouldn't think this was a show that adults and kids can appreciate alike. There are odd jokes, odd pacing, and odd introduction of characters. It feels like they are rushing through the plot and the plot is pretty basic. The solution to Gobo's problem was pretty basic and didn't really make much sense.

The bit with the water wasn't really set up either. There wasn't a thread throughout the story that made water an issue that everyone shared. The Doozers didn't have a subplot about needing more power, the Gorgs didn't have one about needing water for the garden (there was a short line about the Trash Heap feeling dry, but it felt like a throwaway line), the Fraggle weren't concerned about running out of water, only Doc had a little sideline about having no water for Sprocket, but that bit never got revisited throughout the show.

There is a very easy fix for this:

*Instead of Gobo proving himself to Matt by finding Matt's backpack, why not make it so that Matt is going into outer space because there is a drought in Fraggle Rock.

*The same bit about Gobo being scared can happen, but now Gobo is proving he is brave by searching for a new source of water. Red still crashes into the Doozer tower, not because she got distracted, but because the water level of the pond went down and so the Doozers starting building on the exposed land. Instead of the bit with the walkie talkie's, the Doozer scene introduces a problem the Doozers have with power. They are upset because, while they love to build, they don't have enough power to rebuild the structure Red crashed into.

*Gobo goes into the Gorg's garden in search of the Trash Heap where we have Ma and Pa angry about the Fraggles stealing their radishes, but they mention that there are so few for them to steal lately because they have no water for their garden.

*Gobo sees the Trash Heap and she gives him some actual words of wisdom, maybe even keep the "dig deeper bit". She can't really speak though because her throat is dry. Philo and Grunge talk about needing to make her some tea, but they can't fill her teapot. They say the Gorgs haven't watered their garden lately so they can't get enough water for tea. The Fraggles blame the Gorgs for being lazy or mean, but the Trash Heap just barely gets out the words "dig deeper".

*Cut back to Sprocket and Doc once in a while with Doc trying to fix the pipes and Sprocket exaggerating how thirsty he is.

*Gobo and the gang go looking for a water source, similar events happen, and Gobo has to "dig deeper" to help his friends get out of the situation. The events play out the same, but now the water solves all the problems, shows everyone is connected, and Gobo proves himself to Matt.

This would pretty much be similar to Let the Water Run from the original series, only the center would be on Gobo instead of Red and the solution wouldn't be that Doc is the one providing the water. Similar idea, but different solution and set up.

I know it was a pilot, but in the same amount of time with the same basic set up of events, they could have told a much more cohesive story and set up a big part of the show, which is that everyone is connected even if they don't know it. Instead, they spent time on throw away one-liners.

The pilot wasn't bad, but it certainly wasn't great and there were a lot of pacing problems. I hope it gets better as the show goes and I hope the show gets a lot of seasons and is successful. I'll be watching the rest this weekend to see how it goes.

Haven't watched more than the opening song yet, but OMG it's hitting my nostalgia craving hard (plus my excitement for new Fraggle content). Large Marvin!! Those Doozers

!! The Storyteller!! And Fraggle kids I think too! Ahhh I'm loving it so far (not sure if the storyline will be great but I'm just so excited to see our Fraggles again)

2. Begoony is back (in the crowd when Red's about to dive in). Hopefully after some therapy with the Trash Heap to deal with his feelings of abandonment.

4. So is this supposed to be the exact same workshop as the original Doc or do Fraggle holes just tend to appear in places like workshops?

5. The Doozer Dome is awesome and futuristic as to be expected.

6. Cotterpin's outfit in pink is so cute and she seems to have evolved.

7. Gobo and Wembley's room isn't really a room anymore; seems like its in the Great Hall which kinda stinks because their room was so cozy. On the plus side it looks like they got some memory foam mattresses.

8. The Gorg's Castle has more of a cottage feel now. The stained glass windows are beautiful.

9. I'm confused if this is a remake or a continuation as Sprocket hasn't aged and the Fraggles didn't seem to recognize the Trash Heap or even know she is there? Maybe this is Majorie's sister with a different accent and Sprocket is the original Sprocket's great great doggie grandson.

10. Loving the set design especially the caves and all the little creatures during the 'Only Way Home' song.

12. I agree with the previous comment that the interconnected aspect of the 3 worlds should have been emphasized more.

iluvfragglerock said:
9. I'm confused if this is a remake or a continuation as Sprocket hasn't aged and the Fraggles didn't seem to recognize the Trash Heap or even know she is there? Maybe this is Majorie's sister with a different accent and Sprocket is the original Sprocket's great great doggie grandson.
Click to expand...

This is a straight up remake. It doesn't share continuity with the original series directly, but it will have similar lore and stories and set up. This Gobo never ventured into outer space to receive postcards from Uncle Matt before.

Unlike most remakes, the look of the show is mostly intact. So while they all look the same (except Mokey), they may not act exactly as you remember.

Think of it like Tom and Jerry. The same characters look the same and more or less act the same, but they share no history outside of the current production.

MWoO said:
This is a straight up remake. It doesn't share continuity with the original series directly, but it will have similar lore and stories and set up. This Gobo never ventured into outer space to receive postcards from Uncle Matt before.

Unlike most remakes, the look of the show is mostly intact. So while they all look the same (except Mokey), they may not act exactly as you remember.

Think of it like Tom and Jerry. The same characters look the same and more or less act the same, but they share no history outside of the current production.
Click to expand...

Thank you for clarifying. That makes sense.

Looking forward to hearing everyone else's thoughts while watching.

Just popped in to offer my two cents. I'm not a fan of reboots in general, and it's very rare that I'll find one I actually like. I've found one I actually liked. I like the fact that Karen Prell and Dave Goelz returned, and I do have to say that the new voices of Mokey, Gobo, and Wembley are great. Very close to being exact matches, actually. Matter of fact, I almost thought Cotterpin was being voiced by Kathryn Mullins before I looked it up. The writing is actually good, and it doesn't have to rely on gross-out humor (of which I am not a huge fan of). Everyone is in-character, which is a plus. The Traveling Matt postcards feel like they pick up right where they left off.

However, I have to be a little nitpicky about some things.

Let's take the new Doc for example. I like her as a character, I think she's really fun, and I love her interactions with Sprocket, but I just don't like that they named her Doc (yeah, I know it's a stupid complaint, but I just don't think the name fits her). I did love this one part with her in the pilot, though, when Gobo's talking about how awful and terrible "the monster" was, and there's Doc, tickling Sprocket's tummy and saying in baby-talk, "Who's my little peanut butter biscuit boy?" (well, I thought that was kinda funny).

I'm also not too crazy about Marjory the Trash Heap's voice. Yes, I am aware that, with Jerry Nelson gone, they have to make do, and his characters aren't going to sound exactly like they once did, but it just doesn't sound right to me. Not to mention Philo's voice sounds more like someone impersonating John Stephanson more than Dave Goelz (John Stephanson was the man who voiced Philo on the Fraggle Rock animated series). I also think the Architect Doozer needs a little more work, but that's just me.

I'm not too happy with Mokey's new hairstyle. I thought she looked better before. I kind of like her new dress, and her new necklace, but not her hair. That, and she just looks like a completely different character to me.

But other than these nitpicks (and the fact that I've only gotten up to episode four so far), I am definitely liking this. Hope they release a soundtrack, or at least a way to get the new songs on my iPod. And, if it gets more seasons, I hope they bring Lou back! (for those of you who don't know, Lou Fraggle was a character in the episode "We Love You Wembley" from the original series.)
You must log in or register to reply here.
Share:
Facebook Twitter Reddit Pinterest Tumblr WhatsApp Email Link
Top