Difference Between Puppets and Muppets?

what is the difference between puppet and muppet?
Only lines?

I'm not quite sure what you mean there...could you explain further?

I think this explanation will help your question. http://www.schoolofpuppetry.com.au/tutorials.php/what-s-the-difference-between-a-muppet-and-a-puppet

In truth, there's actually not a difference. The Muppets are really a brand and style of puppetry started by Jim that are pretty much world renowned. The Muppets have people behind them to bring them to life, just as any puppet, who have the ability to make us feel empathy for them and learn a great life lesson in the end. One other aspect that sets them apart is that Jim actually came up for his puppet troupe, really for brand recognition.

Thanks for the answers, really appreciated

Puppets are things you put on your hands and play with.

All Muppets are puppets, but not all puppets are Muppets.

If it can be associated with mainstream franchises (Sesame Street, movies featuring characters from TMS, Muppets Tonight, Fraggle Rock, The Jim Henson Hour, etc.), and it involves iconic stock characters we know and love (including second-generation characters such as Pepe the King Prawn, Bobo the Bear, Johnny Fiama, Sal Minella, Clifford, etc., who got their start on MT, etc.), or even characters from films such as The Muppets Take Manhattan (Bill, Gil & Jill from the ad agency), etc., and they can be identified as a definitive, trademarked property of the Jim Henson Co., it's a Muppet.

However, even if it's created by someone who at the time wasn't part of the JHC (e.g., Tom Patchett co-scripted TMTM and TGMC, but other works such as Alf [the original sitcom was not a JHC production, but produced by a distinctly separate company, Alien Productions in this case], or if it has no connections whatsoever to the JHC (Howdy Doody, Jeff Dunham, etc.) or it looks like a sock on a hand, a ventriloquist's dummy, or something that's so generic, it doesn't even bear a remote resemblance to something the JHC would create (including amateur settings such as children's church, etc.), it's a puppet.

As for Yoda, even though he was operated and voiced by Frank Oz, the development took place as part of LucasFilm Studios, not the JHC.

Even Frank Oz had some occasional non-Muppet cameo roles, such as a corrections officer in The Blues Brothers, and other films involving such first-generation SNL alumni such as Dan Aykroyd, Eddie Murphy, Chevy Chase, Bill Murray, Steve Martin, etc., and directorial collaborations with other studios.... 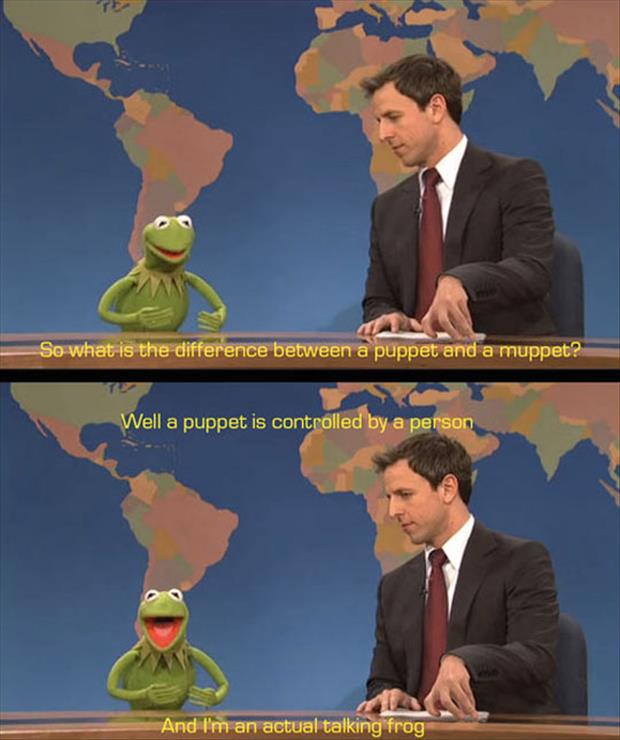