I think we'll be lucky to get past 4 waves

Rtec1 said:
I think we'll be lucky to get past 4 waves
Click to expand...

The fact that DST has become so suddenly silent on the forums is kind of concerning, but maybe they're just busy or spread thin.

If this stopped at 4 waves, I have a feeling they'd feel at least somewhat complete, but there's no way to cover all the Muppets we'd all want with even 8 waves.

From what I've read on other forums I think there seems to be too much hating on the Select figures just because of the love in with the Palisades line, I understand why people feel that way but it surely will impact the sales of these new ones and therefore future waves.
I hope they bring out a few playsets or parts per figures to build a playset to get more people to buy these.

As people did in the Palisades era, I feel people are overly nitpicky with the aesthetics. More pictures I see of these, the more amazing they seem.

And while I may be one of the only few Muppet collectors who has long dreamed and rallied for a 3-4" scale Muppet figure line, in case there is any confusion as to the scale here is a nice comparison(I do feel Diamond was intentionally a bit coy as to answer fans asking if this was in the scale as Palisades...kind of glad they are not in scale tho) 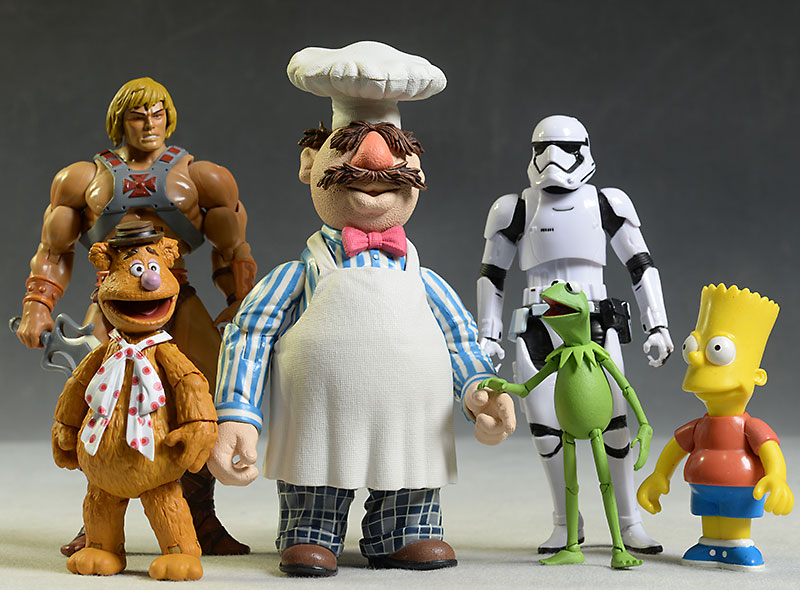 They are amazing and I have to be honest I was going to give them a miss until I saw wave 2, I think that wave is a big selling point, and I cant wait to line them up next to their tiny little pals!

Well, I'm willing to give anything a try. Heck, I would get Dr. Teeth and Animal, along with the Electric Mayhem glass. Plus, I'm still trying to find a Dr. Teeth Funko Pop, but I don't wanna spend a lot of money to get it; I'm more of a bargain hunter when it comes to collecting Funko pops. Someday I'll get that pop. A fangirl's gotta do what a fangirl's gotta do.

We were never intentionally coy with the scale, we always said they were in scale to Select 7" action figures. If that was hard to grasp, I apologize -- I handle all press, print and communications, so it would be on me. It was the only way I saw to provide a scale, as applying a general scale to a group of Muppets without a standard human height in there seemed impossible to me. Even now, I am not sure which Muppet's (or Muppets') height is the baseline referred to as the Palisades "scale."

And sorry I have not been around, I actually have a dozen or so forums I visit in my spare time, in addition to my primary PR/copywriting duties. I thought I had subscribed to this thread, but I did not receive any notifications. Glad everyone enjoys playing with them as much as I do. Four assortments are set in stone, and, I think, sculpted. But I have heard we may do more!

Oh, and I disagree with MWC about the scale having a potential negative impact on the line. Making the figures bigger and more expensive in order to supplement a ten-year-old, largely affordable and fairly complete line seems like it would have been the wrong move. The new scale works with more toy lines than the old one did, and it allows us to make more characters in an assortment, giving fans more for the same price. At a larger scale, I could see Series 1 losing at least one character, and Series 2 losing two.

NECA's Simpsons line, which he references, was made specifically to supplement the old line with new characters, which was a great idea, but not what our line was made to do.

Otherwise, a great review as usual.

Will we find out soon the full wave 3 and 4 line up?
Really hoping to get a Rowlf!
C

Well I opened 'em up, and I have to change my review a bit now that I have "played" with them. I have grown a new appreciation of them.

I love the new scale! Putting them next to other 6" and 7" figures is a lot of fun, and not something I could necessarily due with the Palisades line which is in a unique scale of it's own.

I have to admit, they seem to fit better with my 6" figures and 7" Neca figures than they do with my 7" Diamond Select figures which I thought was funny (Diamond Select's 7" scale seems larger than Neca's 7" scale). But that is my perspective on how large the characters should be, and will change from person to person.

They are delicate, but that's not a bad thing. I do fear braking them and am very careful when moving their joints, but they are sturdier then they look, and I am not as fearful of breakage as I was. I didn't have any stuck joints, which I was very pleased with.

I got good paint apps too!

Of the three packs, Gonzo seems a little on the light side. Great accessories, but Gonzo is the smallest of the "main muppets" and he got packed with Camilla the chicken, which never seemed as much a character to me as an accessory. I really like the set, but I can see this being the least popular, and the least "value" to a consumer.

Kermit knocks it out of the park, his design and accessories are perfect. The fact that he came with two bonus characters was huge! And this became my favorite pack by a long shot.

Initially my favorite pack was Fozzie and Scooter. Because of the two larger characters this easily seemed like the best "value" to me, and until wave 2 was announced was the only one I pre-ordered (I quickly pre-ordered the whole wave once wave 2 was announced, as I'm sure many people did as well). I like them, but really miss the magnet hat, and am looking for something sticky to hold his hat in place (any ideas?). I also fear losing Scooters glasses and left the rubber band in place. I would have preferred they were molded on myself.

All in all I am very pleased with the line and gained a new appreciation for this scale. I wouldn't dream of getting rid of the Palisades and am still displaying them in a place of honor, but this new Select line goes much better with other lines I collect, and that adds a lot of new possibilities and fun to them that I didn't appreciate before. I cannot recommend them enough

I'm all in for all four waves, and hope for many more waves to come.