Dealing with depression and anxiety

Admittedly, there actually was a very specific reason for my deadline: because the timing of the release probably would have given my YouTube channel a much-needed boost in attention.

Sometimes life just happens like that unfortunately. Not much you can do about it.

Part of the problem too was, during the time, other projects would come up, some of which I would juggle at the same time, which meant some dropped down my priority list while I focused on others. . . . 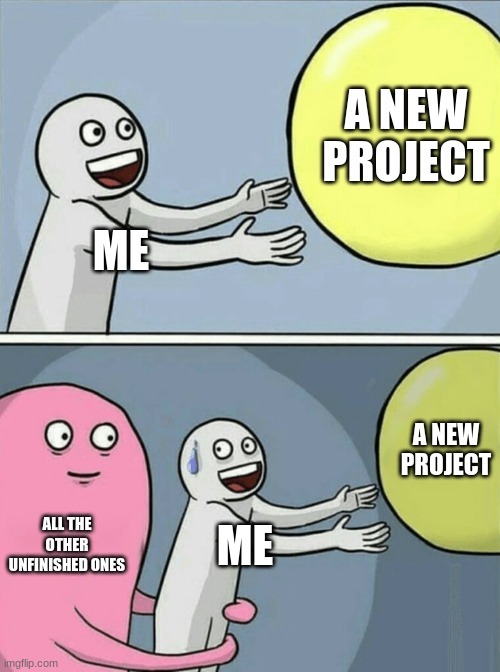 Just this year alone, I've been working on three different projects simultaneously: trying to finish up MORON LEAGUE 4, trying to finish up a new Steve D'Monster short I intended to finish almost a year ago, and a secret project that I happen to know will be of interest to somebody in this thread for, ehh, reasons.

But sometimes I eventually lose interest in a certain project and then I end up procrastinating on it, which is partly what happened in this case as well (on top of everything else I previously mentioned), because, again, I had been working on it off and on for three years already. Right now, I'm in a place where I feel like I want to finish it, and I wish it was already finished, but I also feel like I just don't want to actually work on it anymore, because it's been such a complicated and difficult production that's had a lot of set-backs, hiccups, and other stumbling blocks (not to mention, it's honestly not looking nearly as good on camera as it has been in my head all these years).

This is why I always just make sure to jot something down and come to it later so I don’t forget. I focus on one thing at a time and keep myself in the mood.

The Sidehackers animation project was something I thought of for a year and honestly wanted to get that animated when the encouragement came in late 2020.

So on Tuesday this week I made a trip down to see my old neighborhood and in all honesty….. I found myself missing it more than I usually do during this visit.

If anything, I think just living where I’m living right now has….. officially caught up to me completely. I mean, it’s been over a year since I moved into this place, and to be perfectly honest, every time I find myself traveling down to MA to see my old neighborhood, it just makes me wish I was still there. Cause I immediately feel dread and rage returning in my mind when I head back to my car to drive back “home.”

I think another thing I really dislike about living in this apartment is that…… I just feel too close to everything. Like, when I lived in MA, I enjoyed making a trip down the road to go to the mall if it meant just giving myself a nice drive through the country and small city areas and past a school I went to for pre-school and kindergarten. Now? I can pretty much just make a quick one minute trip there.

it feels like my trips to the mall have now been replaced with trips to my neighborhood.

Honestly dude, the more you keep going back, the more it's going to keep hurting and deepening your depression. I speak from experience.

I get that you miss your old neighborhood, and I get that you hate where you currently live, I've been there many times before, I've lived in places that depressed the crap out of me that have made me miss certain other places where I've lived, but to keep going back to the past like that is not doing you any favors, and will only make you feel worse because you're clinging to something you can't have anymore.

The best you can do is hopefully find somewhere else you could possibly live that's heaps better than the crummy, stuffy, noisy apartment you live in now and see what you can do to move out and move on to something better - it may take a long while though, it certainly won't happen overnight, it's a much healthier option that dwelling on the past.

I mean here’s the truth - I like visiting it because it’s very quiet and peaceful and has a lot of nice nature around that it helps ease my mind when I’m walking. I’m speaking as someone who can only tolerate the sounds of trucks backing up for so long before going down there to ease my mind and let it settle down for a bit. Even if I lived somewhere else that isn’t as noisy and stuffed I would still visit the place (if close by) because it’s a very beautiful neighborhood to walk around in. Plus I like seeing my old neighbors and walking in the woods when it’s fall and spring.

Like honestly I get no enjoyment at all walking beside the busy intersection because there have been numerous instances I have been startled from ***holes randomly honking their horns or having to deal with loud, obnoxious motorcycles. The only reason I live here in the first place is no thanks to a rushed apartment search and a virtual tour all because of covid.

I don’t always go down there to help with stress - I sometimes go down there just because I’m in the mood. At the very least I make sure to do it in the afternoon when the trucks are busy so I don’t have to put up with it at night time afterwards.

I will also mention it also hasn’t really helped with how certain stuff has been pretty challenging for me this year - two losses, one of covid and the other cancer, dealing with a narcistic Latino Karen who just made an absolute fool of herself with her “situation,” and the drama that came in through the “achievement” I made of finding unreleased SS episodes.

Maybe someday take a drive in the opposite direction. Drive straight north up to Canada, or Maine, for a change of scenery. It won’t be long before the leaves start changing colors. I’ll bet it’s beautiful up there.
You must log in or register to reply here.
Share:
Facebook Twitter Reddit Pinterest Tumblr WhatsApp Email Link
Top