I heard there’s been a lot of layoffs at Warner Brothers since this AT&T merger. That’s how the cookie crumbles.

All I know is that in Dilly's words, the studio told him that Courage, "was not a priority."

The studio don't want their Scooby snacks be snatched by Courage's cookies.

MuppetSpot said:
I heard there’s been a lot of layoffs at Warner Brothers since this AT&T merger.
Click to expand...

That AOL merger in the 2000s didn't last, why merge with yet another internet/cellphone corporation again?

If Death Mountain from the Legend of Zelda games was somewhere Courage found himself having to journey through, I get the feeling this is the kind of musical motif Jody Gray & Andy Ezrin would compose for it:

Just close your eyes and imagine Courage making his way through a huge and treacherous dungeon.

Marty Grabstein's anecdote in this video reminds me how Tony Sampson apparently went through about 200 takes of Eddy saying, "Yep, good times!" because Danny Antonucci wanted it a certain way, and it apparently took him about 200 tries to get it just right.

On another note, in rewatching his actors reel, I just realized that in a couple of those clips where that older guy is asking him about somebody wanting a prescription filled, or why somebody came into a diner at 4am was the same guy who voiced Lumiere in BEAUTY AND THE BEAST. 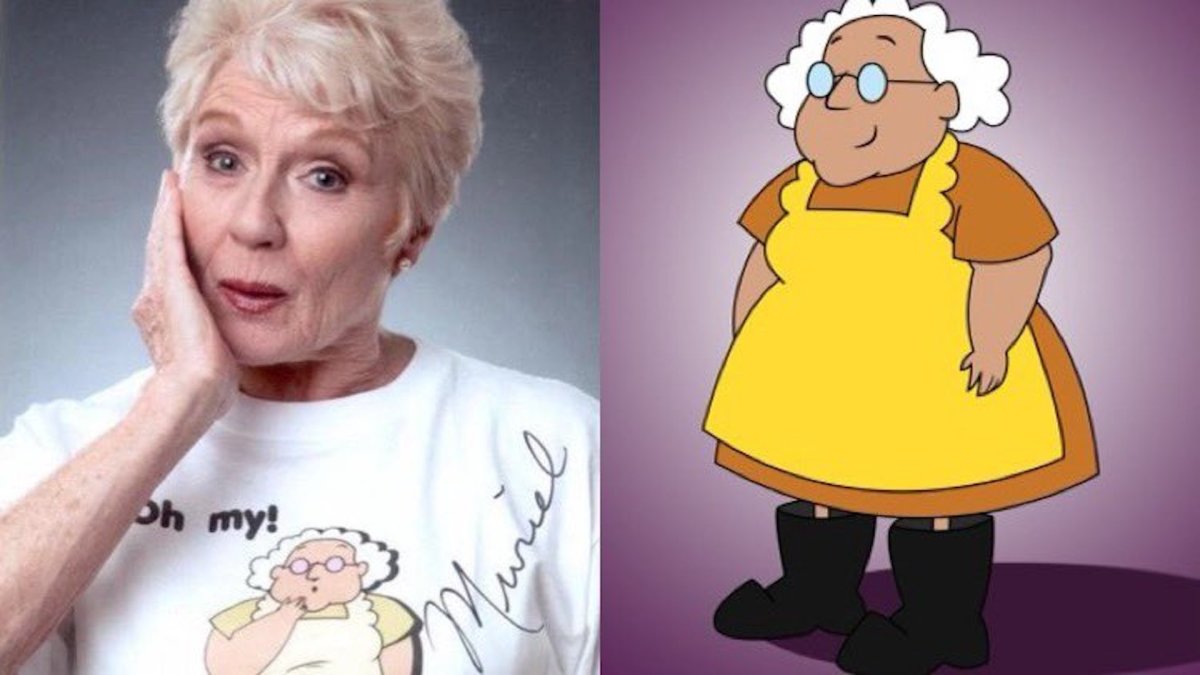 Thea White, Voice Behind Muriel Bagge in ‘Courage the Cowardly Dog,’ Has Died

Thea White, the voice behind Muriel Bagge in ‘Courage The Cowardly Dog’ and Aunt Margaret in ‘Scooby-Doo!,’ has passed away. She was 80 years old.

It's a shame that it's come to this. Right now I'm just watching COURAGE to honor Thea White. Thea White/Muriel Bagge, you will be sadly missed. Thank you for being a part of my childhood.

I give John Dilworth kudos for going for authenticity: more often than not, animated shoes tend to just hire unionized voice actors who could possibly imitate the way a sweet old lady or a crochety old man may sound, but in the case of Muriel and Eustace (and even Eustace's Ma), they actually were voiced by elderly actors, so it wasn't so much of a stretch for them to dial into their characters.

In fact, one of the things that strikes me about Courage was it didn't use just a whole lot of rather prolific voice actors to play the characters . . . Lionel Wilson was Tom Terrific back in the black-and-white era of TV animation, and sure we had Kath Soucie playing Little Muriel, Jim Cummings as Fusilli (and I swear he was Bobby Ganoosh), and the later Peter Fernandez (Speed Racer) as a number of incidental characters, but much of the rest of the voice cast pretty much consisted of local NYC character actors - even Marty Grabstein (and his New York accent is rather noticable in the first few episodes). I suppose given that the show was produced independently in New York through Stretch Films, as opposed to be produced in-house through Hanna-Barbera Studios (or later Cartoon Network Studios), Dilly had to pretty much bypass the use of such veteran voice actors who, more than likely resided out west in Los Angeles.

Still, this is such another sad loss; I think I'll take a hint from Any and honor her memory by watching some Muriel-centric episodes.